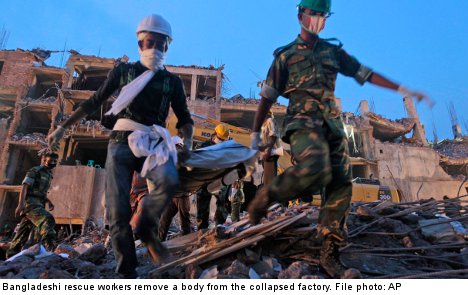 “Today H&M publicly commits to support the Accord on Fire and Building Safety in Bangladesh, initiated by IndustryALL and UNI Global Union,” the Swedish company announced in a statement on Monday.

While H&M did not buy products from the Bangladeshi factory in question, the brand has figured among the names of other global retail giants that depend on third-country subcontractors for deliveries. Observers have questioned who in the global supply-chain has ultimate responsibility.

H&M was quick to underscore that the new accord was in line with previous commitments that the Swedish fashion brand had embraced.

“Based on a study that was conducted in 2011, the concern of lapsed fire safety licenses was raised with the government of Bangladesh,” H&M noted in its press release on Monday, adding that the company had introduced fire safety education to its suppliers that same year.

The NGO Avaaz was one of several observers raising their voice for further action after the factory collapse. It focused its campaigning on the Gap and H&M to sign agreements to further safeguard the safety of workers at the end of their supply chain, and a spokesman told The Local on Friday that a full page advertisement asking the H&M CEO to commit to such an agreement was pulled by the business daily Dagens Industri.

“I’m so sorry but we couldn’t approve the creative. If it wasn’t so personally against Karl-Johan Persson it would have been OK,” responded a sales representative in an email that The Local was given access to.

“Now 780,000 people around the world are calling on the CEOs of H&M and GAP to sign the pact to stop more Bangladesh fashion disasters.”

On Monday, H&M underlined that its new commitment would be backed up by its strong presence in Bangladesh.