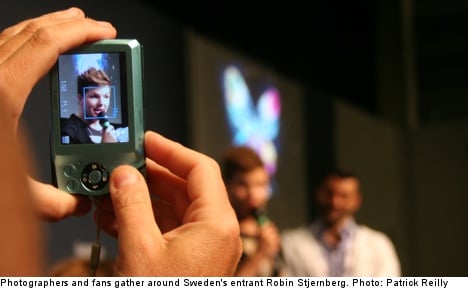 Eurovision – love it or hate it, you certainly can’t avoid the annual popfest. Particularly when it has landed on the doorstep of your adopted home city.

Malmö has been buzzing for the past week to the tune of Europop. Indeed, ever since the city was chosen to host the event, beating Stockholm and Gothenburg in the process, the capital of Skåne has been revelling in its newfound status, because finally it was known for something other than Zlatan, falafel, and shootings.

Right now the 39 contenders for, ahem, glory have arrived in the city and pressed the flesh with fans, press, delegates, and hangers-on. Star attraction is of course British representative Bonnie Tyler, who can fill up a press conference quicker than you can say “Turn Around”, and who was asked to sing a few bars of her eighties hit Total Eclipse of the Heart.

The Welsh diva obliged on one condition – that the reporters chime in too with the chorus. We did of course, thereby ending any chance of ever winning a Pulitzer prize. Serious stuff, this Eurovision reporting.

Fun is one thing that you do associate with Eurovision, particularly if you are participating. Take Sweden’s Robin Stjernberg, who was rolled out to meet the baying hordes of journalists after his rehearsal, and endured increasingly bizarre questions.

Reporter: So you used to wrestle?

Robin: Well, yes, but it was a long time ago.

Reporter: So would you say your wrestling past has helped you prepare for Eurovision?

Stjernberg has come in for criticism, chiefly for not being Yohio, but he does have some support. A volunteer handed him a letter from a young fan simply addressed: Robin Stjernberg, Malmö Arena, Malmö.

The estimated 1,000 press have had to experience the sweet and the sour since the media centre opened last Friday. On the first day, there was a revolt when the internet server went down leaving hapless journalists with nothing else to do but curse the resourceful ones who grabbed the available ethernet cables to get online.

Naturally, it was the German press pack that lived up to country stereotypes by seizing the cables first with ruthless efficiency. Rumours that German reporters have put their beach towels over the best seats in Malmö Arena for Saturday night’s finale remain unfounded.

Learning the vagaries of Swedish fika was an altogether more pleasant experience for the hungry reporters. A well-known coffee brand sponsored the Sunday coffee break, featuring no less than seven types of biscuits, with detailed explanations of each treat.

Cue a mad scramble by the international reporters for the last remaining chokladbollar and the Swedish delegation muttering; “What, these people don’t queue?”

Right, let’s get back to work.