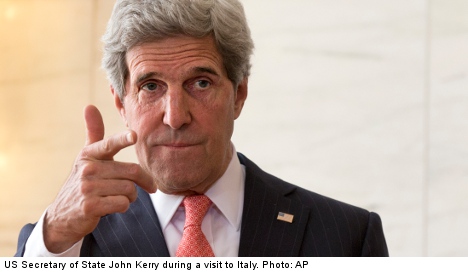 Kerry will meet his Swedish counterpart Carl Bildt and Prime Minister Fredrik Reinfeldt, the government said on its website.

“Current foreign policy issues will be discussed at the meeting, including the worrying developments in Syria, possibilities to renew momentum in the Middle East peace process, and the international community’s engagement in Afghanistan,” it said.

Economic development in the European Union, a future free trade agreement between Europe and the US, and issues relating to the Arctic were also on the agenda.

Kerry is one of the foreign ministers of the Arctic Council, an international forum for the eight states bordering the Arctic, who are meeting on May 15 in Kiruna, in northern Sweden.