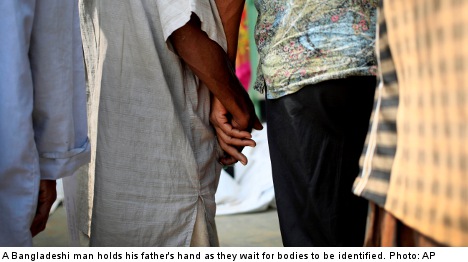 “H&M and Ikea, for example, are under constant scrutiny,” Frenander, a supply chain management expert at Swedish sustainability group Respect, told The Local.

“It means they haven’t been able to shirk responsibility for ten, fifteen years now.”

Frenander said that while the textile business had nurtured efforts to make sure workers were treated well further down the supply chain, there was less insight into the working conditions in other industries.

“Clothes companies have come quite far, they’re under the microscope constantly, but who checks on how workers who produce a particular type of screw for an industrial machine are doing?” Frenander said.

She added that lack of insight may also be due to smaller Swedish companies not knowing what they demand they can reasonably place on suppliers abroad, while they also had less consumer pressure on them to make an effort.

She said that the labour-intensive nature of the garment industry meant constant demands on cheap workers.

“You need a lot of labour, you can’t replace people with robots like you can in other industries,” Frenander said of the paradigm of high labour needs in an industry where fashion trends demanded quick turn-around and cut-throat competition from other budget chains.

“Trends mean you have to change the product more often, which means pushing the prices down, including the cost of labour,” Frenander said.

The balance that needs to be struck was how to implement demands on fair wages, over-time compensation, as well as health and safety considerations, and still keep costs relatively low.

In other words, CSR work has to be backed up by reasonable expectations on the supplier, underlined Frenander.

“The important thing is to have an open relationship with a subcontractor, so if they need to evacuate a building they do not feel pressure to keep working because of delivery deadlines,” Frenander told The Local.

“You cannot on the one hand demand that deliveries be done swiftly and cheaply, and on the other hand heap a thousand CSR demands on subcontractors,” Frenander said, underlining that she was speaking about industry level concerns rather than singling out any company.

While Frenander said it would be difficult for retail companies to check the architectural integrity of the factories, they needed to make clear to subcontractors that heeding warnings – which the factory operator in Bangladesh did not do – was expected and encouraged.

“The subcontractors have to feel that they can tell you what is happening, without pressure that makes them put their workers’ lives at risk.”