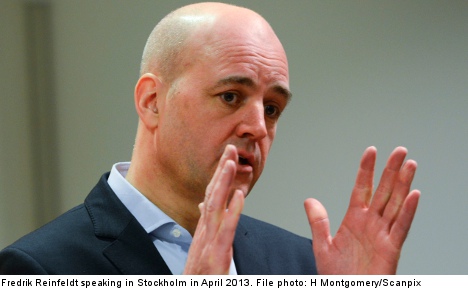 “I don’t think Russia is preparing to attack Sweden. Their security threats are elsewhere,” Reinfeldt said during a visit to a high school in Hudiksvall in eastern Sweden, according to the TT news agency.

Reinfeldt’s comments come following news that several Russian bombers flew remarkably close to Sweden’s territorial borders over Easter, with Nato planes from Lithuania following suit to monitor them rather than planes from the Swedish Air Force.

Sweden’s Armed Forces (Försvarsmakten) have come under increased scrutiny ever since Supreme Commander Sverker Göransson said in January that Sweden could only defend itself for one week.

Last week, a fresh opinion poll revealed that only six percent of Swedes believed the country’s military could defend Sweden against an attack, while 83 percent doubted Sweden could defend itself.

In comments delivered on Monday, Reinfeldt admitted however that Russia is boosting its military might.

“But it’s occurring from a very low level. The Russian military has neither the will nor the capacity to attack Swedish territory,” Reinfeldt said.

However, defence analyst Johan Tunberger, who worked for many years at the Swedish Defence Research Agency (Totalförsvarets forskningsinstitut, FOI), took issue with the prime minister’s understanding of Russian capabilities.

“He doesn’t know what he’s talking about,” Tunberger told the Aftonbladet newspaper.

“If they managed to surprise Sweden, they could take Gotland in a few hours.”

A spokesperson for Reinfeldt refused to elaborate on the prime minister’s statements, telling the newspaper the comments came in response to a student’s question.