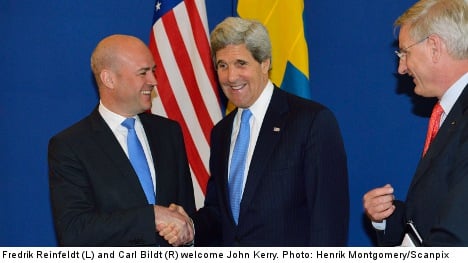 The US Secretary of State added that he would not place demands on the number of soldiers Sweden contributes to the Afghan mission.

“How many soldiers Sweden leaves is up to Sweden, not the US,” Kerry said at a press conference held after he met the country’s prime minister, Fredrik Reinfeldt.

“We are very grateful for whatever Sweden decides to do. As we have said previously ‘in together, out together’. That is the philosophy that has guided us in respect to the mission.”

“Very shortly the president does intend to make public what his plans are for post-2014. But I can tell you that he is committed to continuing to support the mission and will keep supporting the Afghan military.”

“We have not invested in this, all of us together for all of these years, in order to invite failure,” Kerry said.

“It’s the first fighting season where the Afghan military leads the way. Thus far they are doing pretty well.”