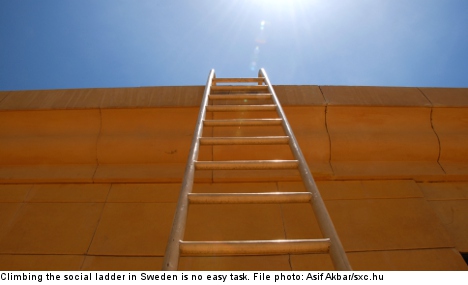 Why do immigrants often face discrimination? How can you as an individual avoid falling victim? This is a question that I would have wanted answered when I was growing up here in Sweden.

I grew up in various tough neighbourhoods of Sweden, dependent on welfare. In this environment, racism was hard to avoid. When I started seventh grade most boys in my class were outspoken neo-Nazis. I remember feeling that Sweden was fraught with discrimination. Luckily, I was wrong. When I went to university and started climbing the social ladder, I realized that the majority of Swedes are not racists. In fact, many are more than happy to encourage immigrants who want to succeed.

You wouldn’t appreciate this by reading the papers, however. The media, politicians, and others who influence young people misunderstand discrimination and racism. The image the media conveyed when I was growing up was pretty similar to that broadcast today: that racism is widespread in all parts of Swedish society. In fact, it is predominant mostly in socially and economically poor neighbourhoods.

The message to my younger self was clear. I could choose to work hard, but shouldn’t expect to be rewarded for doing so. This resonated strongly with me; succeeding in studies didn’t seem to pay off in schools filled with bullying, fights, and general disorder.

It was easy to adopt a world view that the rest of society worked in the same way, at least for a young immigrant from a socially excluded environment. And if my upbringing in a middle-class Iranian family hadn’t taught me to focus at least a bit on academic achievement, I most likely would have performed very poorly in school.

Let me illustrate my point. The media in Sweden sometimes report on studies in which researchers submit several job applications, some with names that sound Swedish, and some with more foreign-sounding names. Applicants with “Swedish” names are more likely to get called to an interview, something journalists interpret as meaning that immigrants in Sweden have little chance of finding employment.

Young immigrants, particularly those living in economic and social exclusion, get the impression that they might as well give up the idea of succeeding in the Swedish labour market. Journalists communicate this message with the hope that it will sound alarm bells that lead to efforts to reduce discrimination and racism. But it would be much more constructive if the journalists themselves better understood how discrimination works, and instead put forward a more nuanced perspective.

Swedish researchers Magnus Carlsson and Dan-Olof Rooth have studied previous research and conducted their own study on job applications. They concluded that a letter from an applicant with an foreign-sounding name is indeed less likely to result in an interview than a similar letter from an applicant with a Swedish name. But this difference is small if the applicant instead picks up the phone and calls employers.

A likely explanation is that immigrants seeking entry-level jobs often have poor language skills, and a letter does not necessarily offer solid proof of your linguistic capabilities. Somebody else might have helped the applicant write it, for example. But if the applicant actually speaks with an interviewer, and has a decent command of the Swedish language, the chances of moving ahead in the hiring process are much greater.

In fact, discrimination isn’t always a result of racism. One form of discrimination often discussed in Sweden is referred to as customer discrimination. Many entry-level jobs for young people exist within services. If you don’t speak Swedish with a perfect Stockholm dialect, for example (because you come from a marginalized immigrant neighborhood, or for that matter from a rural part of Sweden), your ability to sell services or work in retail is lower than that of others, all else being equal. When employers have lots of applicants to choose from, they often eliminate those who don’t have the right dialect.

Is this accent-based selection a form of racial discrimination? While it’s not impossible to change one’s pronunciation, it certainly takes effort. But it’s important to acknowledge that this form of discrimination does not come from simple bigotry, but rather is an effort to take customer preferences into account. It might even help to know that somebody with a deep southern Swedish (or northern Swedish) dialect (not to mention a strong Örebro dialect) might face the same problems as a young immigrant who hasn’t picked up a perfect Stockholm dialect.

We will only make progress in this debate if the media, politicians, and others who influence society gain a better understanding of how discrimination works, and acknowledge that it is not always based on outright racism. Discussing the problem and admitting that discrimination exists and that society needs to fight it isn’t the only important thing. It is also vital to explain how individuals can change their own situation so that they no longer face discrimination (or can succeed in spite of it).

As Carlsson and Dan-Olof Rooth write, the current message about Swedish society might do more harm than good: “In the media debate, the Swedish labour market is sometimes portrayed as being entirely discriminatory and racist. This picture appears, based on our results, to be greatly exaggerated. It can also have a serious impact on job seekers with an immigrant background who therefore are less likely to choose to look for work or go through training than they would have done if the debate had instead been based upon the evidence”.

What are the big differences between those who live in socially rich and socially poor families? It is not merely money. Those that live in socially rich surroundings grow up with the norms, information, trust, networks, and other forms of social capital (a proper Stockholm dialect for example) that enable success. Discrimination can come from having different ethnic and cultural origins than those who are doing the discriminating, but also from having too little social capital. You can’t change your ethnicity. You might be able to change other people’s intolerant attitudes, but this – given the monumental task of changing a whole society – is far from easy. For an individual striving for success, the best tip for avoiding much of the discrimination that exists in society us to accumulate social capital.

By simply being a successful contributor to society, you might change others’ attitudes for the better. This is at least my advice to those growing up in socially and economically poor families, including those of Swedish origin. I can’t say if it’s a perfect piece of advice. But I am confident that we could gain a lot if more people focused on talking about how individuals can deal with discrimination in real life, rather than simply raging against it. The beauty of modern societies such as Sweden’s is that you can find a way to climb up the social ladder – despite the obstacles.

Nima Sanandaji is a Swedish writer of Kurdish origin. He has a PhD in polymer technology and has written numerous books and reports about subjects such as integration, entrepreneurship, and women’s career opportunities.