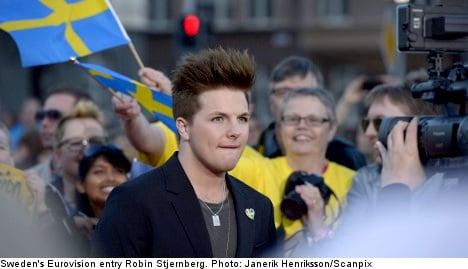 The brief from The Local’s Stockholm HQ was simple – track down Swedish Eurovision hopeful Robin Stjernberg for an an interview. So was born the Robinhunt.

You would think getting a hold of Sweden’s entrant in his native Skåne would be as easy as finding a decent cup of coffee round these parts. Think again, as this reporter traipsed the city in the expectation/desperate hope of rubbing shoulders with Hässleholm’s favourite son.

Frantic calls were put to his management, who were clearly too busy, presumably styling Robin’s signature quiff, to even answer the phone. Then word went round that the 22-year-old pop-prodigy was heading to meet fans at Gustav Adolfs Torg, Malmö’s big town square, which is now a Eurovision hive of activity.

Turned out that it was nothing but a wild rumour and the Robin in question was nothing but a lookalike. So this reporter was forced to lick his wounds and head for Malmö Arena for the first semi-final where Stjernberg was due to be in attendance along with 15,000 other Euronuts.

Finding him among that lot would be the proverbial needle in a haystack. In the press centre the SVT crew were starting their pre-Eurovision show with host Gina Dirawi ramping up the hype in true Schlager style.

All of sudden Danish pop pixie Emmelie de Forest, Ireland’s Ryan Dolan, Eurovision 1992 winner Linda Martin, and the man himself, Robin Stjernberg, emerge. You wait for a single popstar to show up then four of them come at once.

With that The Local made a beeline for Robin, only to be interrupted by a volunteer, who asked to get her picture taken with the Swedish singer. Snap taken, the volunteer chastised this amateur photographer for taking a blurry picture so grabbed Robin for another.

This was my opportunity and for some reason, presumably due to hunger pains, the first question which came to mind was; “How did you manage to lose all the weight Robin?”

“I decided to become more healthy and eat properly. I haven’t had a semla bun in a while but it is worth it as I feel better.”

Judging by Stjernberg’s skinny trousers, apparently the only type sold in Swedish department stores, his approach is working.

As for representing Sweden on home soil, he told The Local that he is embracing all the madness that Eurovision has lobbed at him so far.

“It is a great honour to be our entrant here in Malmö. The only word I can use to describe it is pride. To be part of Eurovision is something special,” he said.

“I’m going to do my best on Saturday night and I hope people vote for our song. Of course, there are many other great songs so it is not going to be easy to win again.”

Stjernberg’s track You has spawned many conspiracy theories as to just who exactly he’s singing about. He happily cleared it up for The Local:

“The you in our song is my Dad. He has always been my inspiration.”

And with that the popstar was ushered off into the Arena and our Robinhunt was complete. One of these days we’re going to have to get a proper job.