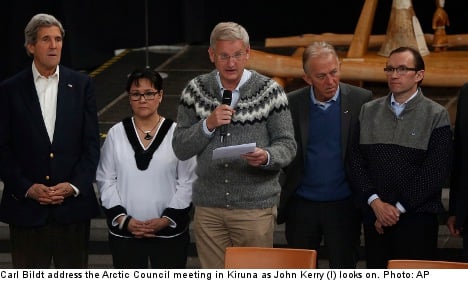 Foreign ministers of the eight-member Arctic Council, including US Secretary of State John Kerry, made the decision at a biennial gathering, which took place in the city of Kiruna in northern Sweden.

The other countries given permanent observer status were India, Italy, Japan, Singapore and South Korea, adding to the geographic reach of the once-obscure group and sending a powerful signal of the polar region’s growing international importance

“It strengthens the position of the Arctic Council on the international scene,” said Swedish Foreign Minister Carl Bildt, who chaired the meeting.

The Arctic Council received an application for permanent EU observer status “affirmatively”, but deferred a final decision on the issue.

“It will be implemented once certain questions have been tackled, but the decision means that the EU already now can act as an observer,” Bildt’s spokesman Erik Zsiga told AFP.

Permanent observers have no voting rights in the Arctic Council, but unlike ad hoc observers they are automatically invited to the group’s meetings.

“It signals openness, and it reflects the fact that many countries outside the Arctic area also have legitimate interests in the development of the region,” Danish Foreign Minister Villy Søvndal said in a statement.

Global warming is happening twice as fast in the Arctic than elsewhere on the planet, Bildt noted.

“The changing climate… creates new opportunities, not least for the Arctic states,” he said.

“These, however, are also fraught with new challenges, and threats that must be confronted.”

“China values the scientific research and environmental protection (work) of the Arctic Council,” foreign ministry spokesman Hong Lei told journalists in Beijing on Wednesday, before the council announced taking on China as a permanent observer.

“(It) has always supported the principles and purposes of the Arctic Council,” he said.

Greenland boycotted the Arctic Council meeting after Sweden refused to accept its representatives on an equal footing with other members, its prime minister said.

“Until Sweden took over the chairmanship in 2011, Denmark had three chairs at the table with a representative for each part of the Danish Commonwealth,” Prime Minister Aleqa Hammond told Greenland daily Sermistiaq.

Arctic Greenland, along with the Färö Islands, is part of the Danish Commonwealth. Under a home rule agreement with Denmark, Greenland has full control of its raw materials and internal affairs, while decisions on defence and international affairs reside with Denmark.

“When the Swedes took over, the commonwealth was only given one chair and Greenland and the Färö Islands had to sit behind and not directly in the negotiations,” Hammond added, saying she feared that a new Canadian chairmanship would adopt the same principle.