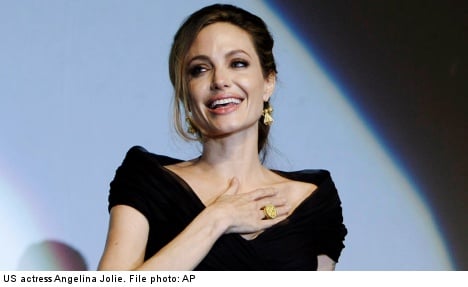 “Anything below the waist is generally difficult to talk about,” nurse Britta Hedefalk told The Local.

Breast cancer, meanwhile, had something of a head-start due to the Pink Ribbon campaigns worldwide, which had made it easier for many sufferers to open up about their disease.

“But we’d like it to one day be as easy to talk about having cancer in a breast as it is to tell someone you broke your leg,” Hedefalk said.

READ ALSO: A Swedish breast cancer survivor tells The Local about waiting for the genetic test to come back, and what she felt about possibly removing her breasts

The Jolie case study, meanwhile, broke new ground because the well-known US actress did not have cancer. She instead had tested positive as a carrier of a cancer gene, and chose to remove both breasts as a preventative measure.

Hedefalk said that some Swedish women with breast cancer in the family were too scared to have a genetic test.

“That Jolie spoke out could help, it sends the signal that it is OK to have the test,” she said.

Hedefalk added that she hoped women who remained hesitant would take note that a positive test result did not spell a death sentence.

“With tests for some other illnesses, I understand that people would rather not know, because basically you find out that you are going to die, which is the case with Huntington’s Disease, for example.”

While Hedefalk said that many Swedish celebrities had chosen to speak out, and that it helped “put a face on cancer”, she also wondered if some felt pressured to go public.

“I think that some celebrities, and this is just a thought, may feel it is better to tell their story in their own words rather than risking it being leaked to the press.”

On the other hand, she recognized that the instinct to speak out and thereby help raise awareness from her own contacts with non-celeb patients in Sweden.

“A lot of people tell us that talking about their disease gives their illness meaning,” said Hedefalk, who has answered patients’ queries about cancer for over two decades.

“They feel that if they reach out and help someone, getting cancer was not for nothing.”