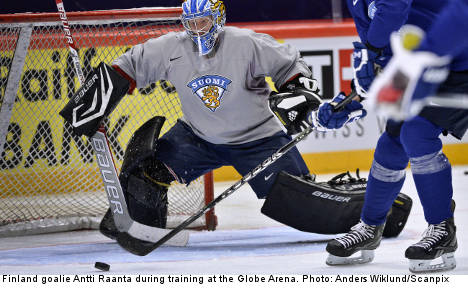 Sweden, who booked their last-four birth by edging 2010 Olympic champions Canada 3-2 in a penalty shootout, are attempting to become the first team to win the gold medal on home ice since the former Soviet Union in 1986.

But to do that, they need to avenge a 6-1 defeat against their Scandinavian neighbours when they fought for the gold at Bratislava in 2011 which gave the Finns only their second world title.

“They (Canada) are a tough team to beat. But everything worked well today.”

“We knew we had to play our best game of the tournament. I’m happy for Swedish hockey because you have to play for the medals in your home tournament.”

Meanwhile, the Finns are set to shrug off the bitter memories of their previous world championship campaign when they failed to earn a medal on home ice in 2012.

Fonder memories for Finland date back to 1995 when they clinched their first ever world crown beating the host Swedes at the Globe Arena in Stockholm.

“As the tournament goes on, you grow as a team, and that’s what’s happened with us,” said Finland defenceman Ossi Vaananen.

“We’re a fairly old team, but a lot of players are in their first tournament. It’s a good mix of guys and we are counting on success here.”

Meanwhile the USA will hope to halt Switzerland’s eight-match winning streak in the second semi-final.

The US team, who won their last world championship medal nine years ago, reached the last four for just the fourth time in 15 years with an impressive 8-3 win over defending champions Russia.

Last year, the USA lost at the quarter-final stage against Finland, but this time the Americans are confident they can go all the way to the title.

“We expected to win this game (against Russia). It’s another feather in our cap. But we want to roll forward,” New Jersey Devils forward Ryan Carter said.

“We’re a confident team. We think we can win a medal, and we want to win the gold medal here.”

However, Switzerland, who earned their last world championship medal as far back as 1953 have been the team of the tournament so far winning all eight of their matches. They will provide a stern test.

The Swiss rose from their disappointing 11th position at the last year’s championships to the last-four of the event for the first time since 1998 under their Canadian coach Sean Simpson.

“It is a real team,” Simpson said of his side. “Whatever happens on the ice, they react to it.”

“Our team stood together under big pressure in the quarter-finals against the Czechs. With that win, the team did something very special for its country.”

The bronze medal game and the final will be played in Stockholm on Sunday.