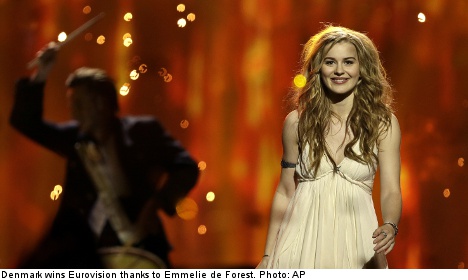 Tipped as one of the early favourites, the 20-year-old De Forest didn’t disappoint, with her song, Only Teardrops, raking in the most votes from viewers across Europe.

Denmark’s victory was mathematically determined before all the votes had been counted.

Viewers and professional juries in 39 countries picked the winner together, with tele-voting and juries each representing 50 percent of the outcome.

The win by Denmark closed out a marathon evening of pop music performances by artists from 26 countries that wowed the crowd on hand in Malmö.

The evening began with an opening number written by Abba’s Benny Andersson and Björn Ulvaeus, along with Swedish DJ and producer Avicii.

While the music ranged from heartfelt ballads to upbeat dance tunes, the evening also featured a number of humourous interludes that showcased Sweden in a self-deprecating manner.

Welsh balladeer Bonnie Tyler was the biggest name to participate in Eurovision this year, but the 61-year-old didn’t pack enough star power to impress viewers or jurors.

Denmark jumped to an early lead in the voting, with Ukraine, Norway, and Azerbaijan also pulling away from the other contenders after half the votes had been counted.

Sweden’s neighbour to the south merely added to the early lead as voting continued, with Denmark eventually amassing 281 points.

The win marks Denmark’s second win at a Sweden-hosted Eurovision, with the Danes emerging victories at the 2000 Eurovision Song Contest held in Stockholm.