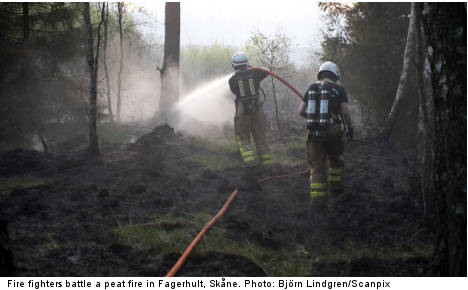 Around 100 fire fighters and military personnel were called in to battle the fire, which by Saturday evening had claimed nearly 500,000 square metres of ground.

They used water bombs and large tank vehicles filled up with water from a nearby lake.

The fire-ravaged peat bog belongs to a peat mining company. The fire is believed to have started next to one of the company’s large and expensive machines, which may have overheated.

“It was probably caused by one of the machines,” said chief of rescue operations André Bengtsson.

The thick smoke quickly spread across the E4 highway near Fagerhult in Skåne and the Swedish Transport Administration (Trafikverket) soon closed the road in both directions. Traffic is only expected to be back to normal on Sunday evening.

Rescue services formed a kind of search party on Saturday in order to inspect the entire peat bog in detail and search for fires and embers.

“We are doing everything we can to find small fires which we did not previously know about. In some places there are fires which we are unaware of,” said rescue services chief of staff Carl-Henrik Holmgren.

While the risk of the fire spreading further is small, the situation was still not completely under control on Saturday.

“Everything could turn around quickly,” said Holmgren. For instance, the wind could change direction or intensify, which could quickly impact the conditions on the ground.

It is tough to extinguish the flames since peat fires tend to continue underground and could go on for a long time. In Sweden there are examples of peat fires raging for weeks.

“When the embers have made their way down into the peat it is difficult to detect them. A fire could suddenly break out,” said Geistrand, the fire engineer.