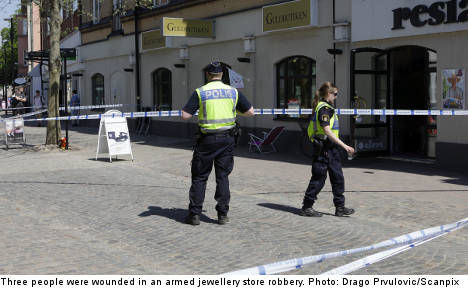 “The 24-year-old was taken in for questioning overnight and was later detained,” police spokesman Nils Norling told news agency TT.

The robbery took place in broad daylight on a busy shopping street in Ängelholm, southern Sweden on Saturday.

Police described the robbers as “dangerous and desperate”.

“They were shooting wildly. One man was shot in the stomach,” said regional police spokesman Calle Persson, who added that is unusual for robbers to take aim at members of the public.

Witnesses said they saw three robbers flee the scene on a yellow moped, which they left by nearby railway tracks, reportedly continuing their escape in a dark Audi.

Norling did not want to comment on the 24-year-old’s involvement in the robbery or say whether the police were still chasing other people.

“We believe there were three culprits. We can say that much,” he said.

“Currently we will not comment on what has been said during questioning. We will question him further throughout the day,” Norling added on Sunday morning.

The police received a large amount of statements from witnesses and were following up on the many tips that came in after the robbery.

“We are still keen for more people to get in touch,” said Norling.

Calle Persson said that four reports had been filed after the robbery as three people were shot and wounded and one other person was nearly shot.

Two men were taken to a hospital in Helsingborg but did not sustain any serious physical injuries. Another man was treated by ambulance staff at the site of the robbery.

The armed robbers escaped with some gold objects but the value of the loot was still unclear on Sunday.

The robbers are suspected of attempted murder.