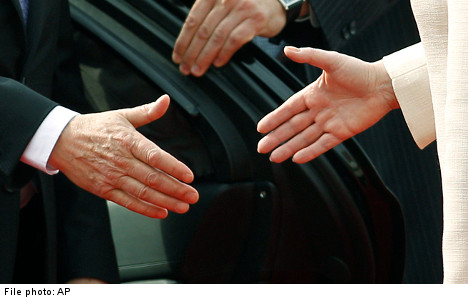 The decision by officials in Trollhättan to pay the man 30,000 kronor ($4,500) means the municipality won’t have to face a review of the case by Sweden’s Equality Ombudsman (Diskrimineringsombudsmannen).

The incident stemmed from an office visit by a man who had been offered an internship with the integration division at Trollhättan municipality.

When the man was set to meet a female supervisor at the office, he refused to shake her hand, explaining his religion forbade him from shaking hands with women unless he washed his hands directly afterwards.

While the incident was later reported to the Equality Ombudsman, the national office that investigates suspected cases of discrimination, the case was settled before the ombudsman began its investigation, with Trollhättan municipality choosing to pay damages to the man.

“The intern candidate explained that his religion forbade him from shaking the hand of a woman he did not know,” municipal spokesman Said Niklund told the TTELA newspaper.

“By law, a person who feels they’ve been disadvantaged because of their religion has a right to damages. We made a mistake, we took responsibility for it, and the person was compensated.”

The incident has reportedly had repercussions at the workplace, however, damaging the morale among the staff at Trollhättan’s integration division. An investigation into the workplace environment is under way.

The leader of the anti-immigration Sweden Democrats said on Saturday the party planned to report the municipality to the Ombudsman for Justice (Justitieombudsmannen, JO), stating that “equality is more important than multiculturalism”.

“This case is extremely upsetting… it is absurd and makes a mockery of equality and Swedish values,” party leader Jimmie Åkesson said in a statement.