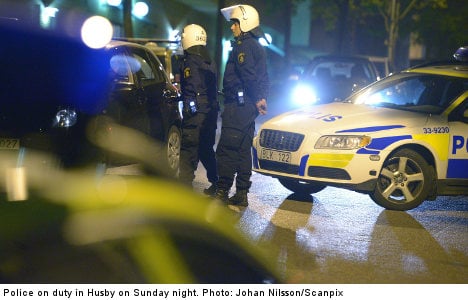 “There’s frustration in Husby and it risks spiralling out of control; people want long-term solutions to social problems instead of an increased police presence,” Djalaie told The Local.

“It’s a neighbourhood where one third of junior high school graduates leave school without adequate grades; they step straight out into unemployment. It’s obvious what the consequences are.”

Djalaie said he had spoken with people of all ages in Husby following Sunday night’s riot, including a local youth leader who went up to the police with some of his teenagers and asked if they could help.

The response, the youth leader said, was that the police called him a “nigger” while the boys were called “monkeys”. They also said the police attacked them with batons.

“If the police don’t want to cooperate, they should just say it; they don’t have to call people names and hit them with batons,” Djalaie said.

“No one is happy today, not even the ones who torched the cars; everyone knows this is not the solution to the problems.”

The shooting last week of a man wielding a machete at police added to the build-up that sparked Sunday night’s disturbances, which left dozens of cars torched and three police officers injured.

While the initial police report stated that an ambulance took the man to hospital after he was shot, local youth organizing network Megafonen reported on May 15th that neighbours said there was never an ambulance.

Instead a hearse turned up to cart the body off at 2am.

Megafonen went on to accuse the police of spreading “disinformation” and demanded an inquiry. The police later modified its official version of the incident.

Djalaie said the shooting likely contributed to the worsening mood among residents in Husby, a district in north-west Stockholm consisting primarily of multi-storey apartment buildings built in the late 1960s as part of Sweden’s “Million Programme” housing construction project.

“Social tension needs a spark, but it’s not the cause,” he said.

Djalaie did not think Husby risked overheating in the wake of Sunday’s disturbances, nor that the incident was a starting point for the sort of car-torching cycle of violence seen in the Paris suburbs a few years ago.

“There’s a strong civil society in Husby. There are a lot of associations, including Megafonen, an organization for young people that arranges everything from film screenings, help with homework, debates, writing courses,” he said.

“In fact I’m surprised this happened in Husby, which is usually very calm.”