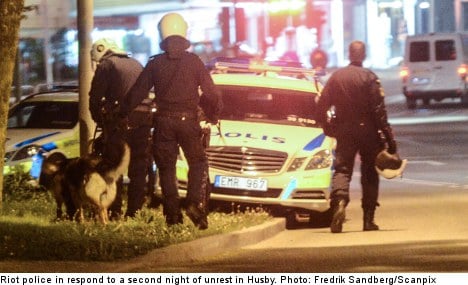 “They are between 15- and 19-years-old. All of them are suspected of assaulting a public official (våld mot tjänsteman).”

Firefighters who arrived to extinguish the blazes were met by young people throwing rocks.

IN PICTURES: Scenes from Husby on Monday night

Shortly after midnight the fire from one burning car spread to three other nearby cars as emergency crews were unable to extinguish the flames.

Riot police with dogs were dispatched in an attempt to disperse the stone-throwing youths so that firefighters could work to put out the fires.

“The problem is that they’re throwing rocks at the fire trucks and stealing the fire hoses. We must try to clear them out so the firefighters can get there,” police spokeswoman Diana Sundin told the TT news agency.

By Tuesday morning the fire crews, under police protection, were able to extinguish the fires.

According to the police, between 50 and 100 people were involved in Monday night’s disturbances.

“Some are 12- or 13-years-old, some are young people and tonight we’ve seen a number of adult criminals among them,” said Sundin.

Earlier in the evening, several cars were set alight at a parking garage on Olsogatan. A van used to transport the elderly was also left in flames.

According to police spokesman Eriksson, a total of 11 cars were set on fire on Monday night, as were four waste containers.

“As far as I know, no police officers were injured during the night,” he told TT.

He added that officers will remain in the area during the day on Tuesday.

“We still have a presence there,” he said.

“We had a lot of people there last night. Whether it was sufficient or not, I’m not sure.”

IN PICTURES: See the damage from the Husby fires on Sunday night

The events mark the second night in a row that Husby has been the scene of burning cars and clashes with police that community-based organizations say stem from frustration over the fatal shooting of a 69-year-old man who was shot dead by police last week.

“You have to see what happened from a wider point of view. It’s not the first time something like this has happened, and it’s not the last. This is the kind of reaction when there isn’t equality between people, which is the case in Sweden,” Rami al-Khamisi, a law student and founder of youth organization Megafonen, told The Local.

The police response to Sunday night’s riots, which left three officers injured and 100 cars in flames, has been criticized by local groups that argue officers used racial slurs and excessive violence in responding to the unrest.

Police spokesman Lars Byström told Sveriges Television (SVT) on Monday that the reports of excessive violence have in turn been reported to the department’s national unit for police crimes, which will investigate the matter.

Meanwhile, Uppsala University political scientist Per Adman indicated that the unrest in Husby pointed to a larger, underlying societal problem.

“This sort of thing is usually dismissed as being carried out by thugs who ‘seize the moment’. But when it happens, it’s always young men who are on the front lines. There is an underlying societal problem; this doesn’t happen in well-to-do parts of the city,” he told TT.

“If segregation deepens, there is a greater risk that it will happen more often.”