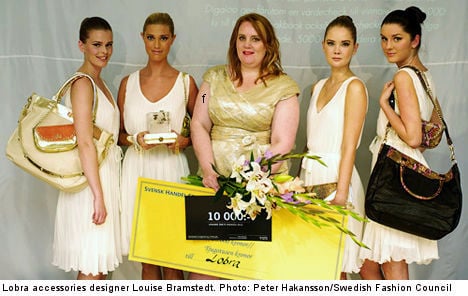 “It made the Swedish fashion industry aware of me and my brand, what I believe in as a designer and the stories I want to tell through my shoes and bags,” says last year’s winner Louise Bramstedt.

Designer of luxury accessories brand Lobra, Bramstedt was recognized in the year-long Rookies competition for her fearlessness and “ray of sunshine” persona.

The Rookies jury, keen to promote Swedish fashion as much more than just dark, minimalist cool, expressed their delight at Bramstedt’s use of punchy colours and her festival spirit. Their prayers had been answered, they declared.

Having lived and worked in New York, Hong Kong, Italy and of course her home country Sweden, Bramstedt’s designs are influenced by an eclectic array of cultures.

The designer credits “The Italian Dolce Vita epoch” as her key inspiration and is currently working in Italy, her second home, on her next collection. She’s also pioneering a new design concept by creating bespoke shoes in Lobra’s unique mix of metropolitan glamour with Swedish craftsmanship and Italian romance.

Bramsted’s competitors last year to bring home the Rookies, awarded by the state-funded Swedish Fashion Council, included the label Stutterheim, which was much less party, more “melancholy”. What the two designers had in common was a strong brand identity that caught the jury’s eye.

“He has found a niche,” says Helena Mellström of the Swedish Fashion Council.

Designer Alexander Stutterheim took inspiration from his late grandfather’s fishing jacket and worked to transform the humble raincoat into a covetable, high-fashion item.

His creations are slick, understated – “for anyone who doesn’t want to look like a sad golfer lost in town”. The coats (and now capes, boots, and socks) are far too refined for that.

“He didn’t want to sell in sport retail channels, he wanted to be in the fashion shops,” says Mellström.

And in the fashion pages. Stutterheim is on the radar of Style.com, coveted by The New York Times and on Draper’s models – perhaps for his ingenuity, perhaps for his design or maybe because he seems like a really nice bloke.

Stutterheim welcomes new ideas from the public, has a healthy Facebook following and has recently acquired celebrity endorsement (none other than Kanye West has recently been spotted in one of his creations).

Even without the blessing of a high-status award, several up-and-coming Swedish designers are turning heads right now. Altewai Saome (Rookies 2011) and Alice Fine (Rookies 2012) will once again be showing their collections at Mercedez Benz Fashion Week this August alongside established fashion houses such Tiger of Sweden, Cheap Monday, Fillipa K, and, another Rookies success story, Dagmar.

Winner of multiple industry awards, House of Dagmar won the very first Rookies in 2005. The label now sells in nine countries as well as on slick online retailers Net-a-Porter, and can boast of the likes of British Vogue and Style.com amongst its supporters.

The distinctly elegant label is run by three sisters who credit their grandmother as the reason for the brand’s conception. Dagmar has a sense of provenance common to many of the Rookies alumni. Stutterheim, Lobra, Dagmar, they have an abundance of self-knowledge, a sense of history. Ultimately, the brands have an identity. Something the Rookies jury is eager to explore. And explore they do, because it’s an elaborate selection process.

“All of them have been called for an interview. In this way the jury see more personality behind the brand,” says Mellström. A process this year’s crop of candidate designers have just gone through, with only five going on to the next competition stage.

Among them are womenswear designers Anna Ekre and Mes Dames, men’s accessories designer c. dellstrand, Krista Kretzschmar Jewellery, and menswear designer Nor Autonom, who are all now that bit closer to being crowned Rookies winner 2013.

With 10,000 kronor ($1,500) worth of look-book printing and dedicated retail space in Stockholm’s super stylish store The Casbah up for grabs, many emerging designers feel it’s a prize worth fighting for.

The designer’s collections this season are a mix of stark, minimalist masculinity and soft, enchanting femininity – very cool, very wearable. Pieces from each designer could easily be worn with the work of the other.

The five nominees will take to the catwalk this August – the final catwalk in a year of numerous shows and exhibitions – with the ever-watchful eye of the fashion press, with trend reporters studiously taking note.

What will be as equally interesting to discover, after the winner has been announced, is how this year’s designers fare in the seasons to come.

The winner of Rookies 2013 will be awarded during Stockholm Fashion Week which runs from August 12th to 18th.