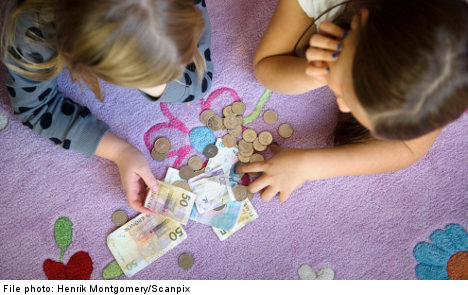 Global auditing firm KPMG has measured “effective income taxes and social security contributions levels” as a more rounded way to look at the tax contributions individuals make to the state.

The business daily Dagens Industry (DI), which got a sneak peek at the list, reported that Belgium and Greece topped the list.

Sweden finished 20th at an “effective tax” rate of 38.3 percent, below a host of European neighbours as well as Curacao and Senegal, when looking at individuals who earn above $100,000 a year. The sum breaks down to a monthly Swedish salary of about 55,000 kronor.

The tax-rate climbed, however, when looking at higher earners. In the $300,000 bracket, Sweden came in fifth with a 49.8 percent effective tax rate. France topped the list, followed by Belgium, Italy and Denmark.

DI summarized that looking at the effective tax rate showed that Sweden in fact had lower income-tax rates than many other countries.

Sweden does still, however, have a top income rate that outstrips many other countries’, which KPMG noted in its 2012 global tax review. Sweden’s top rate was then 56.6 percent, comparable to several other European nations, but the heavy-hitter on the list was found further west.

“In terms of the highest income tax rates in the world, the small Caribbean island of Aruba again took this accolade with a top rate of 58.95 percent, while other countries with top rates in excess of 50 percent are largely European,” KPMG noted in its 2012 comparative study.

“While these top rates may appear high, it is important to remember that a country’s highest personal income tax rate is only one indicator of what taxes individuals may pay on their income,” the report noted.

“Just as influential are which other taxes may apply and on which income thresholds those rates are charged.”