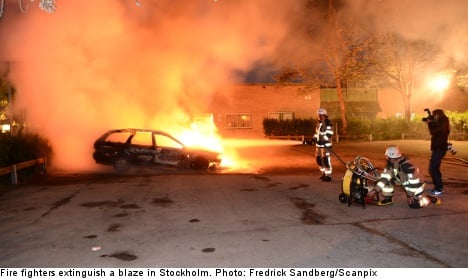 “These are places that have not been affected by this before and this is sad to hear. It feels like people are taking the opportunity in other areas because of the attention given to Husby,” Kjell Lindgren of the Stockholm police told the Aftonbladet newspaper.

The Jakobsberg police station was also vandalized, with rioters smashing the windows, and also damaging a nearby shopping centre.

“I’m scared that it will get worse. It’s going to become like France,” one Kista resident told the Aftonbladet newspaper.

Eight people were arrested, and calm was restored across the city by around 3am.

Tuesday night’s activities mark the third consecutive night of unrest around Stockholm, where over one hundred cars were burned out on Sunday night, and more than one hundred people rioted on Monday.

A community-based organization in Husby, where the riots began, said the troubles stemmed from frustration over the fatal police shooting of a 69-year-old man in Husby last Monday.

“You have to see what happened from a wider point of view. It’s not the first time something like this has happened, and it’s not the last. This is the kind of reaction when there isn’t equality between people, which is the case in Sweden,” Rami al-Khamisi, a law student and founder of local youth organization Megafonen, told The Local.

“There’s frustration in Husby and it risks spiralling out of control. People want long-term solutions to social problems instead of an increased police presence,” Djalaie told The Local.

Sweden’s Prime Minister Fredrik Reinfeldt commented on the matter in a press conference at the Riksdag on Tuesday afternoon.

“We’ve had two nights with great unrest, damage, and an intimidating atmosphere in Husby and there is a risk it will continue,” he said.

“We have groups of young men who think that that they can and should change society with violence. Let’s be clear: This is not OK. We cannot be ruled by violence.”