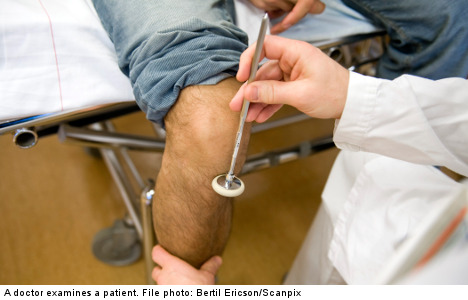 The man’s doctor originally said a bulge on the patient’s thigh was probably internal muscular bleeding after the man took a fall, but the man maintained he had not injured his leg during the incident.

The doctor ran a further test, which indeed revealed that the protrusion was actually a cancerous tumour. However, as the doctor was already on holiday when the results came in, the information languished in the clinic’s computer system.

Meanwhile, the patient, who had also complained of problems breathing, sought further help at hospitals in both Mora and Falun in central Sweden, reported Sveriges Television (SVT).

In the end, he was sent to a bone cancer specialist at Karolinska near Stockholm.

He arrived to a meeting with a doctor for what he thought would be another examination when the doctor told him, “Well, you already know what this is about, don’t you?”

But the patient had no idea, and was shocked to learn that his deep thigh bruise was actually a tumour. Not only did he finally get his cancer diagnosis, but he was also told the tumour on his thigh had become too large to remove.

SVT reports that after attempts to reduce the cancer with chemotherapy failed, the man learned it had metastasized and reached his lungs.

He has now been referred to hospice services.

The man has since reported the health care professionals to the National Health and Welfare Board (Socialstyrelsen).

“If they had listened to me and had I been treated with respect, I may not have had to write this letter,” he wrote.