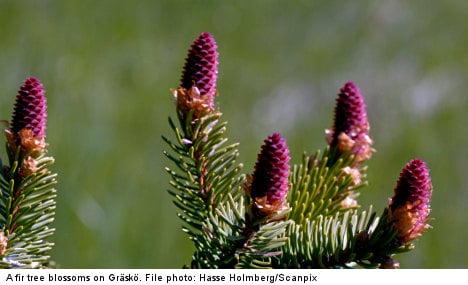 “We weren’t at all sure this would work,” Pär Ingvarsson, evolutionary biologist at Umeå University, told Sveriges Radio (SR), who worked with colleagues from Stockholm and Uppsala universities on the project.

“We could have easily ended up sitting with our 30 terabytes of data without managing to put it all together.”

In 2010, the research was given a 75 million kronor ($11.3 million) boost by the Wallenberg Foundation, allowing the researchers to push ahead with their work.

“It’s the same as it is with humans. The fir trees develop depending on both genetic inheritance and environmental factors,” Stefan Jansson, professor at Umeå Plant Science Centre (UPSC), told Sveriges Television (SVT) at the time.

The Swedish forestry industry plants about 250 million fir trees every year. The researchers now hope the genome will help them with further research to improve the saplings. The aim will be to make them more resistant to disease and to have them grow sturdier.

“Reaching that goal is of course much easier now that we have this tool,” Jansson told SR on Thursday.