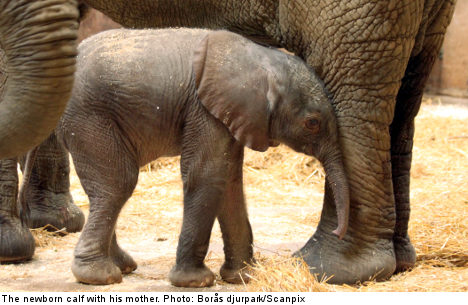 “Dudu already started showing signs of anxiety one month ago, and because last time she had a calf it was born a bit early, the animal carers were already prepared,” the zoo wrote on its blog.

The new calf instead showed up in the early hours of Wednesday, with no staff present. The animal carers instead found the little bull standing up in the pen when they arrived later in the morning, already busy trying to get milk from his mother.

“He was dry and clean and had his mouth on his mother’s udders, just the way it should be!” announced the zoo.

The calf, which zoo officials estimate weighs around 100 kilogrammes, joins big brother M’Changa, born in 2008, and big sister Panzi, born in 2005. He also joined several other babies at the zoo, born to the wolverines and the elks.

The zoo closed public access to the viewing area of the elephant pen to allow the mother and the trio of siblings some peace and quiet.

“Even the older sibling can be very protective against people they don’t know, so they will maybe also benefit from the calm,” the blog stated, adding that the viewing area should be open again on Thursday.

“Each calf is important to make sure the herd has genetic diversity for the future,” the zoo wrote.