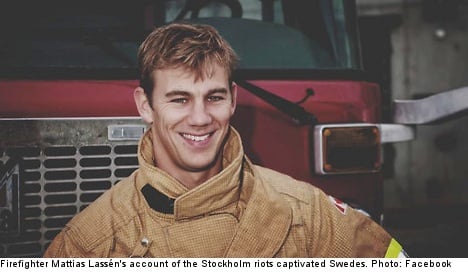 Swedes have been captivated, if not a bit shocked, by the riots that first broke out in the northwest Stockholm district of Husby on Sunday night.

Major media outlets in Sweden have had near non-stop reporting on the disturbances, which have also caught the attention of the foreign press.

But few reports or reflections have arguably garnered a response on par with the one provided by firefighter Mattias Lassén, a 34-year-old firefighter with the Attunda fire brigade in Jakobsberg, a suburb just across Stockholm city lines from Husby, and which was also the scene of violence on Tuesday night.

“We were totally unprepared. We had no indication that we were under any sort of threat,” Lassén tells The Local.

Lassén and his colleagues were responding to a call about a car fire in the car park at Jakobsberg’s town centre when they suddenly found themselves facing “25 to 30” young people who began hurling the rocks at the them.

Fearing for their safety, Lassén and his fellow firefighters had no choice but to leave the area and let the fire burn.

“I’d never experienced anything like it. We did everything we could to get out of there,” the 13-year veteran firefighter adds.

“We can only thank our lucky stars we escaped without any physical injuries.”

The incident left Lassén shaken, and on Wednesday night he took to his Facebook account and posted an open letter to “those who threw rocks at us” in which he described how he and his colleagues had been affected by having 20 rocks thrown at them.

“Luckily, I had my helmet on my head so the rock only left a big mark on my helmet. Luckily, you didn’t hit our driver who was able to drive us out of there and could drop his son off at daycare this morning,” Lassén wrote.

“You have had a permanent impact on my and my friend’s professional lives.”

Within 12 hours of being posted, the letter, which included a picture of a fire truck with a smashed window, had been shared more than 50,000 times on Facebook.

Lassén’s letter went on to promise that, despite the harrowing encounter with the rock, he and his colleagues wouldn’t hesitate to carry out their duties in the future.

“I’m here if your dad needs help if he crashes his car; I’ll help your sister if a fire starts in her kitchen. I’ll swim through icy waters to help your little brother if he falls from a boat,” he wrote.

“I’ll help your grandmother if she has a heart attack and I’ll even help YOU if you fall through the ice on a sunny day in March.

“Why did you do this to me? I also have a family that wants to see me again, just like you!”

As it turned out, however, the humble firefighter was more or less unaware of all the attention his post had generated until he emerged from a meeting around midday to himself inundated with calls from journalists wanting to hear more from a man who had managed to move tens of thousands of Swedes with two heartfelt paragraphs.

“All the attention makes me a little nervous. I really hadn’t expected there to be such a huge response,” he explains, adding that he has since changed the settings on his Facebook profile in hopes of preserving a shred of privacy.

He said he was motivated to write the open letter in hopes of getting the rioters and others to realize that there are real people underneath the helmets he and his colleagues wear.

“I figured the best way to reach these people was to make it personal. My theory is that people don’t throw rocks at people they know,” he says.

“We’re not just a faceless mass of firefighters or police officers. We’re the coach of your sister’s football team, or friends with your neighbour.”

When asked about his thoughts on the ongoing riots, Lassén opts not to get involved.

“Those are societal problems the [Prime Minister] can address,” he replies, also rejecting any notion that his Facebook post makes him into some sort of hero.