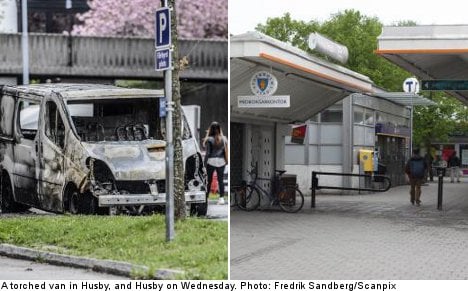 Day five into the Stockholm riots and the world, as viewed from our Stockholm office, has gone crazy. The UK and the US have issued travel warnings for Stockholm. A reporter in the UK contacted me saying he was having trouble getting through to Sweden and wondered in desperation if the networks had all gone down.

My own mother contacted me from the other side of the world to tell me to keep safe. Other colleagues have reported similar phone calls from worried relatives as news of the unrest has reached their relatives around the globe. Some papers have even run stories headlined “Stockholm Burning”.

But the truth is, it's not. In fact I've never felt safer in the capital. A lunchtime stroll around central Stockholm today showed absolutely no signs of danger, no smoke, no fire, and the only rioting kids I saw were fighting over a basketball.

Stockholm is not on fire. Let's get that clear immediately.

The truth is that there is really no comparison to, for example, the riots in England in 2011, where five people died, over 3,000 people were arrested, there was mass arson and looting, and almost 3,500 crimes were reported.

In Stockholm? Fifteen cars burned in the latest night of rioting, rocks thrown, the odd school or police station vandalized or burnt. The most emergency call-outs in a night sits at around 90. Witnesses estimated 100 vehicles were burnt on the first night, but that seems to have been the worst of it.

Another foreign reporter asked me if there has been looting as with the English riots, and there hasn't been, as far as I know. I heard one report of youths stealing a few cans of soft drink from a pizzeria, but that was the extent of it.

That same pizzeria owner told me that he wasn't even angry about it all, rather that he was irritated his usual customers haven't returned while the windows stayed broken.

“What's happened has happened, I can't be angry about it, what's the point?” he said.

Headlines around the world pointed to the growing gap between the rich and the poor as the catalyst for the unrest, suggesting Sweden's usually pristine image has been shot.

Sure, the OECD ranking from earlier this month saw Sweden plummet from first place in 1995 to 14th in 2010. Of course it's tempting to view the riots through the prism of this fact, fresh as it is in people's minds.

But that would be jumping the gun. For one thing, there are plenty of statistics that show that Sweden remains a pretty equal society. Take the Gini coefficient, a widely used measure of inequality. Sweden's Gini coefficient is 0.24 (A figure of 0 denotes a perfectly equal society). The rich-world average is 0.31. Sweden may have become more unequal than it was, but it started out from a very low base.

But even if we accept that Sweden has become a less equal society, is that really the motivation for teenage kids to burn cars? Are 13-year-olds burning cars because the country's affluent citizens are getting richer? I don't know, in fact at this stage no one does.

As Leonard Cohen sang, “The poor stay poor, the rich get rich – that's how it goes, and everybody knows.”

Absolute poverty is not an issue in these areas, nor is homelessness. Rather, many people are living on benefits, receiving enough to survive, but far from enough to thrive. Could this be causing a sense of alienation that is fuelling the fires? Perhaps.

As of Friday afternoon, no ringleader has come forward, lending further credence to the idea that the trouble-causers are just a bunch of unorganized kids who have nothing better to do. As neighbouring suburbs of Husby get in on the act, it becomes a case of “If Husby can do this, we can too.”

One of the Husby residents we spoke to on the scene, a native Iranian, put it all down to bad parenting.

“The transition to life in Sweden is hardest for those who come to Sweden as young children,” she said.

She added that families failed to integrate because they get stuck in a vicious cycle of staying home and getting enough benefits to last until the next month.

Integration Minister Erik Ullenhag is another unimpressed voice when it comes to the international attention on Stockholm.

“I've seen in the international media that this is a riot between young people in some parts of Stockholm and the society, but this is not true,” he told me on Thursday.

“It's a small proportion. The majority of young people in Tensta, Husby, Rinkeby, they go to schools and they want to have opportunities in Sweden, and it's important to tell that story.”

He added that the unrest is unfortunately overshadowing all the good things that happen in these areas.

Out in Husby, the area in the outskirts of Stockholm where it all kicked off, the scene during the day is as calm as the residents themselves.

Yes, cars have been burnt. Yes, youths have been throwing rocks at firefighters. But the city of Stockholm hasn't lost control. Each night, the police have calmed the situation after a number of hours. There have been remarkably few injuries and not many arrests.

Prime Minister Fredrik Reinfeldt said this week that the focus was on stopping the fires, the violence, and the rioting, and then solutions could be addressed.

It's hard to say exactly why the cars are burning, but they are. Stockholm, on the other hand, is most definitely not.