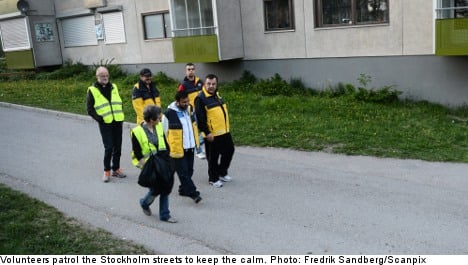 Stockholm police reported only scattered instances of torched cars in the suburbs early Monday, as worse weather and more patrols resulted in what was likely the quietest night in a week.

One car was reported ablaze in the district of Flemingsberg, and another in Kista district, Swedish Radio (SR) reported.

“But it has not been like previous nights, when people have been torching vehicles and tried to attract police and emergency services so they could throw stones,” said police spokesman Albin Näverfjord to the radio station.

Meanwhile, three cars were reported on fire Sunday evening in the medium-sized town of Örebro, 160 kilometres west of Stockholm, the newspaper Nerikes Allehanda reported on its website.

Örebro police, on heightened alert after unrest in recent days, had still no clear idea who might have torched the cars, but quoted witnesses as saying young people had run from the scene at the time of the fires.

Recent incidents in Örebro and other middle-sized Swedish cities had triggered fears that the Stockholm disturbances would spread to other parts of the country.

In the capital itself, police described the night between Sunday and Monday as significantly less eventful than the preceding week, saying cold and rainy weather was only part of the explanation.

“People probably understand that you can’t resolve problems by disturbing your neighbourhood, and we’ve also had a lot of help from volunteers,” said Näverfjord to SR.

The volunteers, many of them parents, have been patrolling the streets at night in the most exposed parts of Stockholm to help deter troublemakers.

In an additional effort to restore calm, Stockholm police have received reinforcements from Sweden’s second and third largest cities, Gothenburg and Malmö, which have both seen riots in recent years.

The past week’s unrest began in the Stockholm district of Husby, where 80 percent of inhabitants are immigrants, apparently after police shot and killed a 69-year-old resident who had wielded a machete in public.

Given Sweden’s long reputation abroad as one of the world’s most tranquil countries, the riots have come as a surprise to many foreigners.

The unrest has prompted Britain’s Foreign Office, the Dutch foreign ministry and the US embassy in Stockholm to issue warnings to their nationals, urging them to avoid the affected suburbs.

Among the Swedes themselves, the riots have triggered debate over the integration of immigrants, many of whom arrived under the country’s generous asylum policies and who now make up about 15 percent of the population.

It has also triggered debate about growing socioeconomic divides.