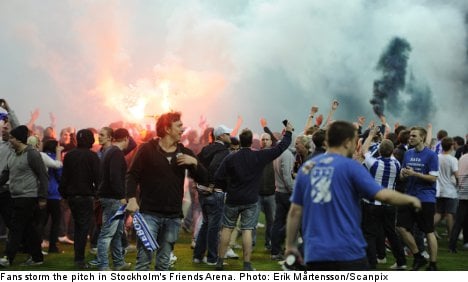 The final between IFK Gothenburg and Djurgården went to penalties before the Gothenburg side took home the victory at Stockholm’s Friends Arena. However, the club’s supporters didn’t waste any time in storming the pitch and antagonizing the Djurgården fans.

Armed with flares, the supporters took to the field and marched to the other end, where Djurgården supporters hurled chair parts towards the opposition and the police in between.

Only moments after a security guard was hit in the head by what appeared to be a part of a seat, a Gothenburg supporter threw a flare into the opposing side’s crowd.

Dozens of riot police stood between the two sets of supporters during the standoff. Police meanwhile grappled with some of the supporters, with three officers sustaining minor injuries.

“The scenes that took place when the pitch was invaded and what happened afterwards are completely unacceptable,” Djurgården’s head of security told the Dagens Nyheter newspaper.

“I can understand, to a degree, that the winning side wants to celebrate with its heroes when they’ve taken the title – that’s neither surprising nor strange and more of a rule than an exception. But this went way overboard.”

Video of the commotion