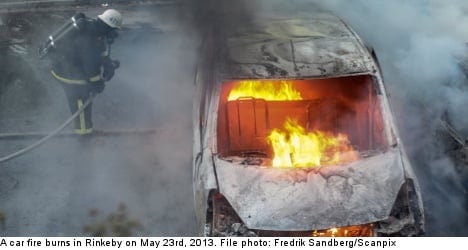 The world has been tuning in to the social unrest in Stockholm, vividly demonstrated by the images of burning cars. Many are shocked by such levels of violence and unrest in idyllic Sweden. What happened to the society famous for social cohesion? Why are angry young men throwing stones and burning cars, and what can we do to stop them from doing so?

Failing integration policies certainly play an important role. Those who immigrate to Sweden often come with strong norms relating to work and individual responsibility. Unfortunately, as we have learned all too well, the Swedish system that makes it easy to get trapped in welfare dependency and difficult to enter the labour market hampers the integration process. Many families, even those with highly educated parents, are trapped in welfare dependency. Young immigrants often struggle to find work. This in turn prompts a minority of young immigrants to turn to anti-social behaviour such as vandalism – a minority that critics of immigration mistakenly believe represents the whole group.

A common argument is that the riots are due to cutbacks in welfare services. This is a misconception. The neighbourhoods that experience unrest have received massive public spending in recent years, in the hope of reducing social problems. Take Husby, the epicentre for the latest wave of violence, as an example. In early 2012, 280 iPads were handed out to pupils at the Husbygård school. This is a luxury many other students in Sweden do without. According to the editorial pages of the Svenska Dagbladet newspaper, Husbygård school receives more than 33,000 kronor ($4,500) per student per year in extra grants due to the socioeconomic background of its pupils.

The public library in Husby has also been renovated recently and now students of all ages are offered extra help with their studies at the library on a drop-in basis in cooperation with the Red Cross. In addition to all of this, the Husby library has participated in “Berättarministeriet” (‘Story-telling ministry’), a programme inspired by US non-profit 826 National to activate youth writing and encourage them to tell their own stories. All this is, of course, financed by public funds. The city of Stockholm has also launched “Järvalyftet”, a public project through which millions of kronor are invested in the massive – and beautiful – Järvafältet field between Husby, Akalla, Kista, Hjulsta, Tensta, and Rinkeby.

Many municipalities in Sweden indeed face harsh times, which force them to reduce spending. But areas such as Husby are not affected by this. The reason is that they belong to the wealthy Stockholm municipality. Geographically these areas are close to the most thriving labour market in Sweden – travelling to central Stockholm is easy and takes little time with public transportation. They are also close to job opportunities in Kista, a district neighbouring Husby that boasts one of Sweden’s largest malls and one of the nation’s main hubs for IT ventures. And it is difficult to describe the nature surrounding Husby, which has been augmented with public investments in playgrounds and other amenities, as anything but beautiful.

This does not mean that young people in Husby, Akalla, Rinkeby and other similar areas have it easy. The Swedish school system has failed many of them, who after completing their studies, still lack the skills and networks to succeed in the labour market. However, youth unemployment does not in itself explain the unrest. This problem also exists in other parts of the country. Many rural parts of Sweden also face a severe lack of entry-level jobs for young people. And the young people living in rural Sweden don’t have the option of commuting to central Stockholm. Nor do they have access to the same level of welfare services as in the capital municipality. But frustrated as they might be, they do not burn cars. The lack of job creation for youth should be seen as a major social problem, in particular affecting young immigrants. But it cannot be seen as the sole explanation for the violence we witnessed in Stockholm during the last week.

Why then are we seeing violence in areas such as Husby? We don’t need to speculate. In 2011 the Swedish Civil Contingencies Agency (Myndigheten för samhällsskydd och beredskap, MSB) published a research study which examined this very phenomenon. The study notes that frustrated young people in certain neighbourhoods have very low respect for the police, the fire department, ambulance drivers and other representatives of public authorities. Driven by anti-societal anger, they often seek confrontations with representatives from these branches of the public sector.

The fights seem to spread from one neighbourhood to another. After police in 2009 intervened against riots in Rosengård – a neighbourhood in Malmö where the failure of Swedish integration policies is perhaps more vivid than in any other part of the country – uprising also followed in Akalla and Husby in Stockholm. According to some of the aggressive youth, the latter actions were out of “sympathy towards our brothers in Rosengård”. The study notes that during these uprisings, small fires were set and false alarms sounded in order to lure rescue personnel and police into the neighbourhoods, to then attack them with rocks. Similarly, in 2010, vandalizing youths in Husby attacked the local metro station, police patrols, and finally the local police station. Similar behaviour is repeating itself today.

So, yes, social exclusion and the failure of Swedish integration policies are to blame. But there is also a simpler explanation to the violence: a small group of aggressive young men who like violence. According to some Swedish media reports, the unrest in Stockholm has been carried out by a combination of angry local youths, hardened criminals, and radical left-wing activists – often travelling from other parts of Stockholm to join the violence. These small groups of individuals act as ringleaders, gathering other young people around them. They see themselves as fighting a war against the police, the fire department, and ambulance drivers. In this war their weapons are stones and burning cars. The violence often seems to be coordinated so that the fires start at the same time as journalists arrive.

So far Swedish authorities have shown limited capabilities for stopping this small segment of destructive individuals, who are giving quite a headache to all the striving and honest people in Husby, Akalla, Rosengård and other similar neighbourhoods. Luckily, the citizens of these very neighbourhoods have themselves stood up against the violence and seem to have helped calm down the situation. This is a good illustration of the fact that social turbulence cannot only be dealt with by harsh acts by the police, by labour market reforms, or by public funding, but also by a strong civil society.

Hopefully, a combination of the good forces in society will prevent similar acts of violence from starting and spiralling out of control. Perhaps we can even hope that, in the future, the media will not exaggerate, and even sometimes glorify, such unrest should it once again occur on the streets of another neighbourhood in Stockholm or elsewhere.

Nima Sanandaji , a Swedish writer of Kurdish origin with a PhD in polymer technology who has written numerous books and reports about subjects such as integration, entrepreneurship, and women’s career opportunities. He is a regular contributor to The Local.