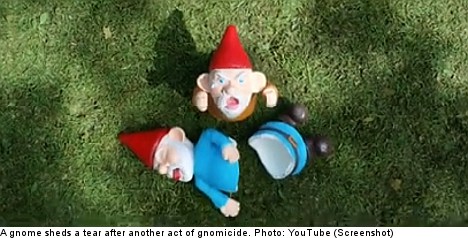 The Ikea ad, released last month, features a young couple using violent means to ward off an angry army of gnomes that appear to be disgruntled about the changes in garden accessories.

The couple in the video, featured below, employ several acts of gnomicide and indeed aggravated gnomicide in their attempts to rid their property of the garden adornment, including a hammock scoop and a power-jet hosing.

The commercial was not well received, however, by all viewers across the country, and spurred 50 letters of complaint to the Advertising Standards Authority (ASA), according to the tabloid the Daily Mail. While viewers claimed the ad was “distressing”, the ASA will not be acting on the complaints.

Ikea, meanwhile, disagreed that the ad was unsuitable.

“We can confirm that no gnomes were harmed in the making of the advert, thanks to clever CGI post-production and some brave stunt doubles.”