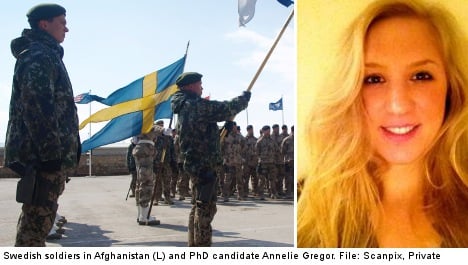 Last week, as I got on the metro in Washington, DC, I noticed a young soldier, wearing his camouflage outfit on the train. The man sitting next to me stood up and walked over to the soldier, shook his hand and said stridently: “From the bottom of my heart, I want to thank you for your service.” The soldier straightened his posture and smiled.

Three or four other people on the train looked up from their Blackberries and followed suit with the same gesture.

Contrasting this experience to a train ride in Stockholm, I thought to myself that the chance of a similar event happening in Sweden is equal to seeing a flying unicorn. A uniformed officer on the train in Stockholm is, at best, met with silence and avoidance of eye contact and at worst, met with ignorant questions, such as why Swedish soldiers fight America’s wars funded by Swedish taxpayers’ money.

As a Swede, I have encountered countless cultural differences when it comes to the perceptions of soldiers by the average American and the average Swede. I find Swedes have a tendency to brag about their society, but when I reflect on the dichotomy of treatments of soldiers in the US and in Sweden, I am ashamed to say that Sweden does not have much to bring to the table.

Culturally, the view of the soldier is based on two historically different experiences. It is embedded in Swedish culture that everyone is equal and no one should be entitled to feel as if one is better than anyone else (see: lagom). Being proud of your profession is OK, but crossing the line of being too proud is as socially unacceptable as disliking children’s book author Astrid Lindgren.

For example, take the Swedish Minister of Defence, Karin Enström and her op-ed in March, where she argued why Swedish soldiers are the most valuable assets within the Swedish Armed Forces and why they are important for Sweden. For an American, this is commonly accepted political platitude. In Sweden, however, these kinds of support-our-troops statements are a rarity. They are not politically accepted by the average Swede and not even taken as granted by the country’s soldiers.

Admittedly, the support for US troops in the US has not always been as high spirited as it is at present. Soldiers in the post-Vietnam era were not met with warm smiles and high-fives. However, in the post-9/11 environment, the support for US troops is mirrored in every part of American society, whether it is priority boarding on flights, a yellow ribbon tied on a tree or a free beer at a local bar.

In Sweden, however, the soldier support is not as well tuned. As Swedish war correspondent and author Johanne Hildebrandt has argued, in Sweden the tendencies to criticize are often ignorantly directed at the wrong target. In the US, Americans may dislike Congressional policies of where troops should be sent, but they still respect and support the US soldiers (and even Swedish soldiers for that matter) who are risking their lives, whether it is in order to secure an Afghan school for girls against the Taliban, or protecting civilian human rights workers in Congo.

Perhaps it is time for Sweden to look across the pond for lessons and reflections upon the two different ways members of the armed forces are being treated.

While historically rooted social and cultural norms are hard to break out of, it is time for the average Swede to find pride in the peace-stabilizing efforts Swedish soldiers have contributed in the Balkans, Somalia, Afghanistan and many other unstable parts of the world.

Oh, and dare I say it; Swedes should even let Swedish soldiers cross the unaccepted line and be very proud of their profession.