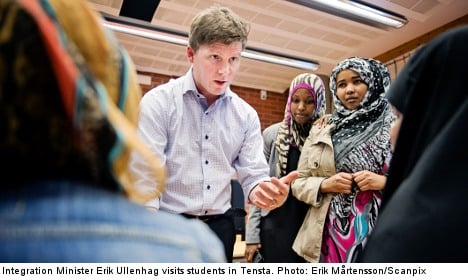 Ullenhag shared the message while speaking to a group of around 100 school students in Tensta, one of Husby’s neighbouring districts that was also targeted by vandals last week.

The minister said that the prejudices about the Husby residents will be fueled because the people who don’t know anything about the area will associated it with burning cars.

Ullenhag chose not to venture out to Husby during the week of unrest.

“The people who threw rocks and those who burned cars got enough attention last week. Now it’s all about trying to support the positive trends and to show that we seriously care about those who live in the area,” he told the TT news agency.

One of the students, Mert Yilmaz, pointed out that the car burning was a direct result of the segregation in Sweden.

“It would be better if the refugees who come to Sweden lived in the middle of the city instead, then it wouldn’t have happened,” he said.

But the integration minister stressed that living arrangements can’t be settled in such a manner.

“The problem is that for those who it’s gone well for, they have chosen to move on. We must ensure that we have positive cycles. Why, for example, is there no mosque in Tensta, I think that’s strange,” he said.