The container stood on a train platform in Herrljunga, a town of roughly 4,000 in western Sweden. It is used to store sand, which is laid out on icy roads and surfaces in winter time.

The man probably got into the container to seek shelter from the harsh weather after missing the last train home, local newspaper Göteborgs-Posten wrote.

He ended up freezing to death.

He worked in a stock house in the town of Vara and has been described as a very lonely man.

“Of course he should have at least taken a cab, but perhaps he wasn’t sure how to sort out the payment,” Sture Eriksson, the man’s former boss, told Göteborgs-Posten.

Eriksson, who worked with the lonely millionaire for 20 years, described him as an intelligent, hard-working man who never said a bad word about anyone.

“He was a bit old-fashioned and had no friends as far as I know,” said Eriksson.

The man had been reported missing on March 15th, about two weeks before he was found dead. The caretaker of his apartment building had entered his home after the mailman said his mailbox was filled to the brim.

Policemen spotted the man on the Herrljunga train station six days later. He told the police officers that he was fine.

According to a cousin, the man lived with his parents for the most part of his life, but they have both passed away – the mother in 2009 and the father in 2012.

The police investigation into the case was closed on Tuesday, with no one suspected of any crime.

The 59-year-old’s millions will now go into the Swedish Inheritance Fund Commission (Allmänna arvsfonden), from which money is distributed among children, young people and the disabled. 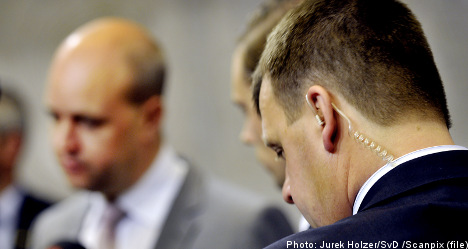 Gothia Protection Group is one of the seven companies that provides bodyguard protection in Sweden and is currently employed by about 20 corporate heads, Dagens Nyheter (DN) reported on Friday.

“The American and English members who are elected bring their experiences from their countries,” he added.

The heightened security fears come on the heels of a Norwegian impostor and fraudster stealing 15.6 million ($2.33 million) from two Swedish millionaires last year.

Philip Holst-Cappelen remains at large after stalking, then threatening and stealing millions of kronor from two Swedish millionaires in Gothenburg and Stockholm, Aftonbladet reported on Tuesday.

On Monday, three of his accomplices were charged at Stockholm district court for aggravated robbery, kidnapping and receiving stolen funds and property. One accomplice has confessed to parts of the crimes but claims to have been cheated by Holst-Cappelen, while the others deny the charges.

Holst-Cappelen, 45, is on an international wanted list and most of the funds remain missing.

Holst-Cappelen and a 32-year-old male accomplice from Indonesia lived in an apartment that shared an entrance with a 47-year-old millionaire’s home in Gothenburg, Aftonbladet reported on Tuesday. From there, they tracked his movements for several months.

Another accomplice accompanied Holst-Cappelen into the apartment in March 2010. They overpowered the millionaire and threatened to cut off his fingers unless if he emptied his accounts to them.

The millionaire was trapped in his apartment for six days until he transferred more than 3.6 million kronor in his savings and shares to an account that was later withdrawn by the accomplices.

The man did not report the incident to police because the assailants had also threatened to kill his mother, the report said.

Several months later, the gang struck again, kidnapping another millionaire in his apartment on Stockholm’s exclusive Strandvägen for three days. They made threats against him and his daughter until he transferred 12 million kronor to the kidnappers, Aftonbladet reported.

Holst-Cappelen is alleged to have targeted six high-earning Swedes as potential victims, including a Carnegie trustee and a Wallenberg director, by scrutinising salary lists and and information about family members, the report said.

Gothia Protection is unique in that it focusses on personal protection for its customers, DN reported.

The kidnapping of electronics chain Siba’s CEO Fabian Bengtsson in early 2005 led to an increase in the demand for personal protection rose sharply, the report said.