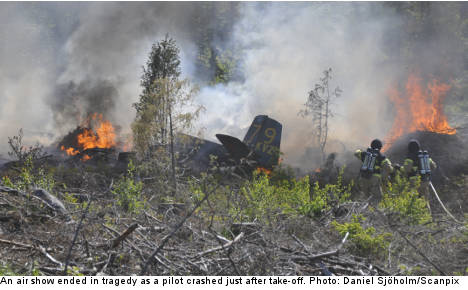 The show at Söderhamn airport in eastern Sweden was supposed to go on for the whole weekend, but it was stopped short after the small, propeller-driven plane crashed in a forested area just beyond the runway.

Directly after lifting, the pilot of the SK 50 plane raised an alarm, having noticed an engine problem. Moments later the plane hit the ground.

The 67-year-old pilot, called Lars-Erik Fleck, is believed to have died instantly.

“It is an unfathomable tragedy. He was such an experienced pilot and a fantastic plane mechanic,” Fleck’s friend, Per-Olov Blom, told tabloid Expressen.

There were no passengers on board the plane, but on the ground were 500 spectators who had come to the airfield to see pilots and parachutists show off their skills.

“A fire started immediately after the crash and there was a minor forest fire around the plane,” Per Andersson, head of the rescue operation, told news agency TT.

The accident happened at around 2PM on Saturday. Organizers of the air display show then decided to cut the event short.

“We’re doing it out of respect for the pilot and his family, whom we empathize strongly with,” explained Hans Dunder, chairman of the Bollnäs aircraft club.

Organizers and rescue personnel were not sure what caused the accident. The Swedish Accident Investigation Authority (Statens haverikommission) has launched an inquiry.