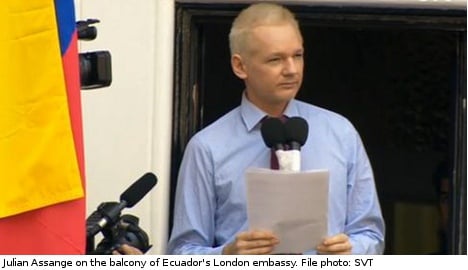 Ricardo Patino has also offered to hold talks with his British counterpart, William Hague, to try to reach an agreement over Assange’s future, the Guardian newspaper reported.

Assange has been holed up in Ecuador’s embassy in the Knightsbridge district of London since June 19th, 2012.

The WikiLeaks founder faces allegations in Sweden of sexual assault and rape against two women in Sweden and was arrested on an extradition warrant in December 2010.

He was bailed and embarked on a marathon round of court battles, but finally exhausted all his options under British law in June 2012, when the UK Supreme Court overturned his appeal against extradition.

Assange then sought refuge at Ecuador’s London embassy and the South American country has since granted him political asylum.

However, if Assange leaves the embassy, he risks being arrested by British police and sent to Sweden for questioning over the two women’s allegations, which he denies.

Assange has said that he fears being extradited to the US from Sweden and that he may face the death penalty for leaking confidential information via WikiLeaks.

Elisabeth Massi Fritz, the Swedish lawyer who recently took on the case of one of Assange’s accusers, issued a statement in May demanding that Sweden pressure Ecuador into handing over the WikiLeaks founder.

She said Assange’s claims that he may face the death penalty is “just a way of circumventing different countries’ systems and laws in order to avoid responsibility for the deeds he is presently suspected of committing”.

“On Sunday 16 June Ricardo Patino, Ecuador’s foreign minister, will be visiting London in order to meet with Julian Assange at the Ecuadorian embassy, on the eve of the first anniversary of Mr Assange in our diplomatic premises.

“The ministry of foreign affairs of Ecuador has informed UK authorities that Mr Patino will be in London and has offered to meet with foreign secretary William Hague to discuss the case of Julian Assange.”