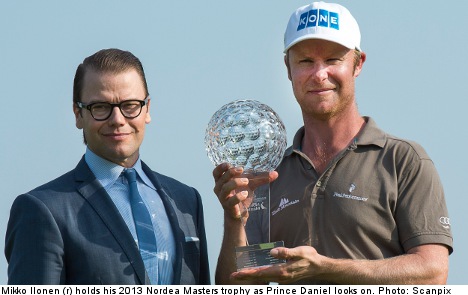 The 33-year-old Ilonen, the overnight leader who had finished second in China and Morocco earlier this season, hit a final round, three-under-par 69 to bag a 21-under total.

That was three shots ahead of Sweden’s Jonas Blixt, with Austria’s Bernd Wiesberger sneaking third on 17 under.

The second-place finish was a bitter pill for Blixt.

“I’m happy with how I played but I can’t say that I’m especially happy over coming in second.”

Ilonen’s two previous victories on the European Tour came in 2007 – the latter at this event, referred to at the time as the Scandinavian Masters.

The Finn had carded rounds of 70, 63 and 65 heading into the final day on Sunday at and continued to make his mark at the picturesque waterfront course of Bro Hof Slott, sinking birdies on the second, third, 11th and 13th holes, his only error a bogey sixth on the long 12th.

“I could feel a lot of support from Finland, especially today.”

He downplayed his bogey on the 12th, saying: “I just got ahead of myself with the first putt.

“I’ve said for weeks now it doesn’t really bother me if I make a bogey because I know I can make it up and it was the first time I went for the 13th in two.”