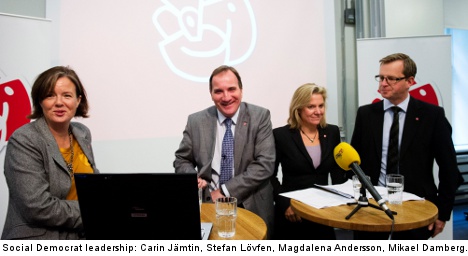 The statistics come following an informal survey by the Svenska Dagbladet newspaper (SvD), which revealed that eight out of 14 of the blue-collar unions claimed they wanted to see the Social Democrats acting alone and not as part of the red-green alliance with which they entered the last elections.

“I think that it’s good not to commit yourself too much before an election but that the parties go by themselves to the election on their own agendas and policy statements,” Anders Ferbe, head of the IF Metall union, told the paper.

Ferbe, who took over Social Democrat leader Stefan Löfven’s post at the helm of IF Metall, dismissed a rerun of the last election’s red-green alliance with the Green Party (Miljöpartiet) and the Left Party (Vänsterpartiet).

“I think that it may even be counter-productive. The Swedish people want to know what the parties stand for and which issues will be pushed for,” Ferbe added.

The sentiment was shared by IF Metall chairman Johan Lindholm who said the Social Democrat party “should develop its own policies instead”.

The Social Democrats climbed 4.9 percentage points to 35.6 percent of voter confidence since 2010, according to Statistics Sweden’s (SCB) latest Political Party Preference Survey that was published on Tuesday.

Together, the Social Democrats, Left Party, and the Greens have the support of 50.5 percent of the Swedish electorate, with the four parties of the centre-right Alliance coalition government – the Centre Party, Liberal Party (Folkpartiet), the Moderates, and the Christian Democrats – commanding a combined 40.7 percent of voter support.

SvD’s survey showed that eight out of 14 LO unions feel that the Social Democrats should enter the polls alone, five declined to answer, and one could not been reached.