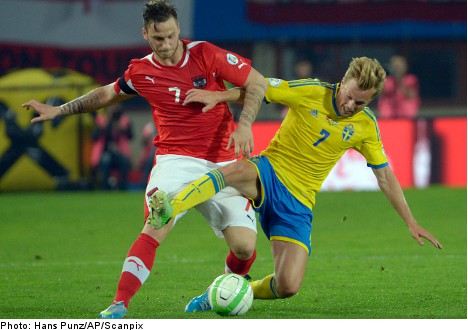 The Swedes, who had never previously beaten Austria at home, started the game brightly, dominating early possession and putting pressure on the home goal with much of the threat coming through PSG striker Zlatan Ibrahimovic.

But Austria were the first to score following a glaring mistake by Jonas Olsson at the heart of the Swedish defence.

Olsson let a flick on from Marc Janko bounce across him allowing for Martin Harnik to steal the ball and run at keeper Andreas Isaksson. Isaksson felled Harnik inside the box and David Alaba converted the subsequent penalty.

Isaksson escaped with only a yellow card, but that will be sufficient to rule him out of Sweden’s game with the Faroe Islands next week.

The goal gave Austria confidence and they swept forward, pushing back the Swedes who were unable to get any rhythm or composure in their game.

The second goal game after slack marking by Andreas Granqvist allowed Janko a header which he converted at the near post.

The Swedes responded with a few searching attacks, with Alexander Kacaniklic notably coming close, although it was Austria that continued to play the better football.

Swedish hopes were rekindled with eight minutes remaining after a sublime pass from Ibrahimovic set up Johan Elmander to lob the approaching Austrian keeper Robert Almer.

Despite a couple of late penalty shouts, the Swedes were unable to clinch an equaliser and the impressive Austrians held out for a crucial three points which sees them gain the initiative in second in Group C.

In the other game in the group, veteran Robbie Keane bagged a hatrick as Ireland disposed of the Faroe Islands in Dublin leaving them level on points with Austria but with a poorer goal difference.

Austria’s next game is away to Germany, while the Irish host Sweden – two games which will go along way to determining the outcome of this tight group.