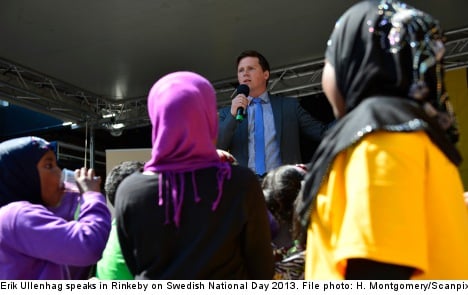 The request was revealed on Monday in an opinion article by Integration Minister Erik Ullenhag of the Liberal Party (Folkpartiet), in which he explained that the government wanted the ombudsman’s offices moved to either Tensta or Rinkeby, two districts northwest of central Stockholm with large populations of residents with foreign backgrounds.

“This has important value as a signal that society’s institutions are present where people feel they are furthest from society,” Ullenhag wrote in the Dagens Nyheter (DN) newspaper.

He added that the moving the ombudsman’s roughly 100 employees to the Stockholm suburbs would help “lift the most vulnerable parts of the city” and create employment opportunities.

“The decision is intended to break a negative spiral of flight from an area where there is widespread social exclusion,” the minister added.

According to Ullenhag, the relocation of the Equality Ombudsman is taking place alongside a larger move by the city of Stockholm to relocate roughly 1,500 jobs within the city’s administrative offices to the outer-regions of the Swedish capital.

However, Stockholm University professor Eskil Wadensjö, an expert in macroeconomics, immigration, and integration, said it was hard to know whether the move would have any positive effects in neighbourhoods plagued by social exclusion.

“You don’t know until you’ve evaluated it, but it probably won’t lead to any change in recruitment of those who are employed by the Equality Ombudsman,” he told the TT news agency.

Previous studies have shown that providing Sweden’s main employment office, Arbetsförmedlingen, with additional resources to assist foreign-born job seekers has had an effect on integration, and Wadensjö admitted that moving the ombudsman might also help, despite it never having been examined previously.

“It’s a relatively small agency, so I don’t think it will have much of an effect. But it’s an interesting experiment and will be interesting to follow up on in a few years to see what has happened; to see if there is any local recruitment,” he told TT.

“If nothing else, it has signal value; it shows that they care about these suburbs.”