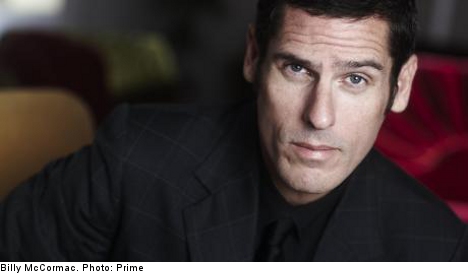 When California-born McCormac found himself in Scotland after finishing university in the early 1990s, forging a career in public relations in Sweden was the farthest thing from his mind.

“Sweden wasn’t on my radar at all,” he tells The Local.

Fast-forward nearly twenty years, and McCormac now concedes it’s hard to imagine having anything other than the career he’s had in Sweden.

But that’s not to say it was easy.

“It was tough at first. I was an average guy in my twenties and didn’t know a word of Swedish when I moved here in 1995,” he recalls.

“But I forced myself to stick it out and forced myself to speak Swedish, no matter how awful or embarrassing it was. For me, it was the gateway to adapting culturally and not always feeling like I was on the outside looking in.”

Last week, McCormac’s unexpected Swedish career reached a new milestone as he was poached from heavy-hitting Swedish PR agency Prime to lead the Stockholm chapter of the Swedish Property Federation (Fastighetsägarna), a trade organization representing the interests of private property owners in Sweden.

So how exactly did an American guy who followed a Swedish girl to Stockholm on a whim end up heading one of the country’s most influential lobbying groups?

“Part of it has to do with what I’d call ‘grit’, which may seem like a really American concept. To me, it’s the difference between surviving and not surviving when facing adversity,” the 43-year-old McCormac explains.

“A lot of us expats sometimes spend so much trying to fit in that we lose sight of what makes us unique and then fail to exploit that advantage.”

When McCormac first landed in Stockholm he spent time refurbishing antique furniture, an extension of a woodworking hobby dating back to his childhood.

But after having his thumb severed in a bloody workplace mishap, McCormac decided to switch gears and found himself working at JKL, one of Sweden’s premier public relations firms, after taking a chance responding to a listing seeking an English-language consultant for an international client.

While McCormac relished the position, he also “worked like a dog on nights and weekends” perfecting his still developing Swedish language skills.

“I posed thousands of stupid questions to anyone who would listen,” he recalls.

Another endeavor that was pivotal in shaping McCormac’s career was his involvement with the Stockholm Spectator, an English-language opinion and analysis website launched in 2004 that wasn’t shy about criticizing the Swedish media and its perceived “leftist consensus”.

“The establishment absolutely hated us,” McCormac says of the online publication, which became an important labour of love outside his day job.

“I learned the ways of the Swedish media, the inside mechanics of the game of shaping opinion in Sweden.”

While McCormac found himself in the firing line at times for his rants on the Stockholm Spectator, the project taught him some important lessons and opened doors professionally.

“I learned you need to be ready to invest hundreds of hours in something you believe in without the slightest hope of ever getting paid. If you get into something to make money, you’re doing it for the wrong reasons,” he explains.

But McCormac’s outspokenness and way with words caught the attention of Timbro, a free-market oriented think tank in Stockholm that eventually recruited him to head up their communications and messaging efforts.

“I ended up being in the media a lot and that sharpened by skills as a communicator,” he says.

McCormac found himself being asked to comment on the political scene in Sweden and the United States, making regular appearances on television during election years.

Over time, he became the go-to commentator for offering right-leaning perspectives on US elections, earning the label as Sweden’s most vocal Republican.

“It’s not a label I wanted, but I figured it gave me a chance to explain politics as I see it and add some different dimensions to the debate,” he explains.

The additional exposure prompted yet another PR agency, Prime, to lure McCormac away from Timbro to bring his expertise on politics and business from both sides of the Atlantic to its own clients.

“It’s important to remember that expats actually have an easier time making themselves indispensable for an organization compared to Swedes,” he says.

“If you really work on making your Swedish on par with that of a Swede, you still have all this other stuff to offer that a Swede can’t and that makes you that much more valuable.”

As he prepares to take the reins at the Swedish Property Federation, McCormac says that foreigners looking to build Swedish careers need to put in extra effort, but that doing so can pay off in the long run.

“You always have to be thinking about the next opportunity and how you can best use your own time to move things forward,” he says.

“A lot of it comes down to putting extra time in outside of work, learning the language, making contacts, and devoting yourself to a projects that you are passionate about and that let you make a name for yourself.”