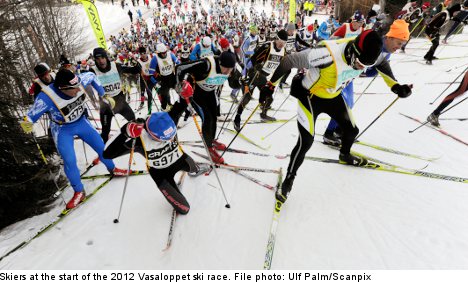 Previous studies had found that endurance athletes have a higher risk of problems with their heart rate or rhythm than non-active people.

The new research, though, suggests that the risk increases the more frequently an athlete competes — and that those most at risk are the sport’s elite.

“Being in the fastest group or participating more than five times during a 10-year period actually doubles the risk of having different sorts of pathological slow heart rhythm disturbances,” study co-author Kasper Andersen of the Uppsala University Hospital’s medical sciences department told AFP.

“It is surprising that we could show an increased risk of atrial fibrillation among these participants that are supposed to be (at the) higher end of the physical activity scale,” he said by email.

Despite this, the data did not point to any higher risk of early death, he said.

Extending over 90 kilometres, the Vasaloppet cross-country ski race, held every winter in Dalarna in central Sweden, is one of the longest and biggest ski races in the world.

The participants generally are much healthier than the general population — they smoke less, have lower fat and higher fibre consumption and are in better physical and mental shape.

The new study, published in the European Heart Journal, looked at nearly 53,000 people who had participated in the Vasaloppet between 1989 and 1998.

“We found that those who completed five or more races in a period of 10 years had a 30 percent higher risk of developing any arrhythmia than those who did one race only,” said Andersen.

“Similarly, skiers who had the fastest finishing time relative to the other participants also had a 30 percent higher risk of developing any arrhythmia in subsequent years.”

Andersen said the same pattern would “likely” be found in other endurance sports like marathon running and triathlon.

Despite the increased risk, the skiers measured for the study have about half the mortality rate of the general population.

They had no higher risk of the type of arrhythmia that can cause sudden death.

Andersen stressed the findings did not show that the sport caused arrhythmia, and should not deter people from exercising.

“There is strong evidence that physical activity and exercise have positive effect on the risk of other diseases. This is especially shown on cardiovascular disease that is one the most frequent diseases in the Western World,” he said.

“We believe that it is generally safe to prepare for and participate in the Vasaloppet races.”