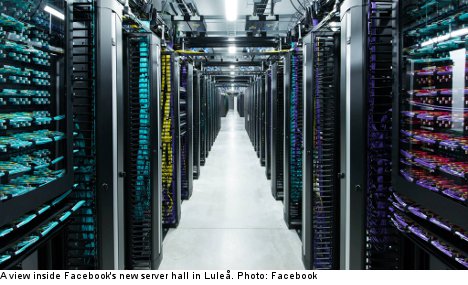 A tour of the Luleå server hall, Facebook’s first outside of the US, was put on for a handful of journalists from several countries. Facebook representatives on hand refused to comment on allegations that the US government is spying on internet users through channels that include Facebook.

“I refer you to the statement that was made by Facebook last week about this, that’s all we have to say about it,” Jay Parikh, vice president of Facebook’s infrastructure, told the TT news agency.

IN PICTURES: See inside the new server hall in Luleå

In the statement he referred to, Facebook founder Mark Zuckerberg denied his company had any connection to the US spying scandal that emerged last week.

The data mining programme, referred to as “Prism” was leaked to the media by a former US government contract worker, and was to give the NSA and the FBI access to systems belonging to nine of the world’s major internet players, including Facebook, Google, and Skype, according to reports by The Guardian and The Washington Post.

Each company has denied the allegations.

“Facebook is not and has never been part of any programme to give the US or any other government direct access to our servers. We have never received a blanket request or court order from any government agency asking for information or metadata in bulk (…) and if we did, we would fight it aggressively,” Zuckerberg said in a statement soon after.

While the Facebook spokesperson in Luleå refused to comment on the matter from a Swedish perspective, representatives from the Swedish government underlined that Swedish law still applied at the server hall.

The server hall in Luleå will handle information from Facebook’s 350 million users in Europe. In a statement, the data centre claimed that it would likely be one of the most efficient and sustainable on earth. The equipment inside is powered by locally generated hydro-electric energy that is 100 percent renewable.

“In addition to harnessing the power of water, we are using the chilly Nordic air to cool the thousands of servers that store your photos, videos, comments, and Likes,” the centre wrote on its Facebook page.

“Any excess heat that is produced is used to keep our office warm.”