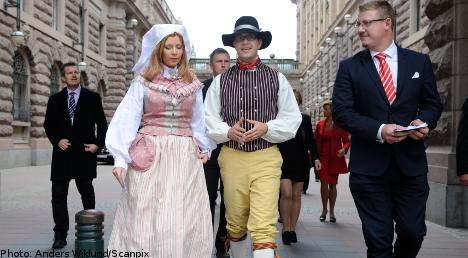 “It’s totally absurd to call us xenophobic when we really aren’t against everyone who comes here,” Sweden Democrat MP Mattias Karlsson told the Svenska Dagbladet (SvD) newspaper following the ruling.

The case stems from a February 2012 broadcast of P4 Extra on Sveriges Radio (SR) in which a journalist who attended the same school as Sweden Democrat party leader Jimmy Åkesson was asked whether the two of them had met again as adults.

“And he went in that direction and became the leader of a xenophobic party and you became a journalist who focuses on racism, among other things. Have you met today as adults?” the presenter asked.

Among other things, the commission reviews whether programmes live up to rules requiring impartiality, protecting children, and preventing undue intrusion into people’s private lives.

The complaints alleged that the Sweden Democrats aren’t a xenophobic party, but rather one that is critical of immigration and that referring to them as such amounted to bias.

But after comparing the party’s platforms from 2005 and 2011, the Broadcasting Commission has ruled that referring to the Sweden Democrats as “xenophobic” does not constitute bias, SvD reported.

The broadcasting regulator found that nationalism was a “central part of the party’s platform” and that the party advocated for a “common national and cultural identity among four-fifths of the population”.

Moreover, the Sweden Democrats believe that “it’s obvious that certain cultures are better than others”, the Broadcasting Commission found.

Karlsson disputed the ruling however, and pointed out that “15 percent of our members have immigrant backgrounds”.

“They shouldn’t get into political arguments and try to interpret what we mean,” he told SvD.

“It’s just as bad as saying that the Moderates are against salaried workers or the Social Democrats are anti-business.”