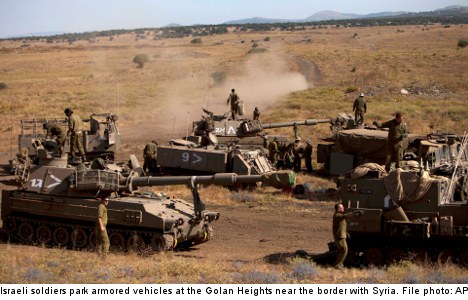 The Israeli newspaper Haaretz reported on Wednesday that UN Secretary General Ban Ki-moon had spoken with Swedish representatives about the possibility of Scandinavian military personnel replacing Austrian soldiers as part of the United Nations Disengagement Observer Force (UNDOF), which has patrolled the area since 1974.

“It’s in very preliminary stages,” an Israeli official told AFP on Thursday on the condition of anonymity.

“It hasn’t been established yet who agrees, who wants it. The conditions are not clear.”

On Wednesday, Austria started withdrawing its personnel, as Syria’s civil war rages around its positions and following attacks and abductions of peacekeepers.

Haaretz said that Bildt would only send Swedes as part of a larger Nordic force from Finland, Norway and Denmark.

The Israeli official said “we don’t know everything that the Swedes said to Ban, but we know that there are feelers in that direction.”

Ban called on Wednesday for better protection for peacekeepers on the Golan and said it was “essential” that the mission remain.

Bildt’s press secretary confirmed Sweden had indeed received a request from the UN.

“It’s true that the UN secretariat has prepared the ground with Sweden, but also with a large number of other countries,” Bildt’s press secretary Erik Zsiga told the TT news agency.

Zsiga denied, however, assertions made in by Haaretz that Sweden was involved in negotiations with the UN regarding the UNDOF mandate and structure.

Ban called on the UN Security Council to consider measures to beef up the force.

“These include, as a matter of priority, enhancing the self-defence capabilities of UNDOF,” he said in a report.

Diplomats said the improved protection would include more armoured cars and body armour, and that the mission would cut back on patrols and perhaps close some observer positions.

The UN Security Council is to meet with troop-contributing countries on Thursday and plans to vote on a new mandate for UNDOF on June 26th.

Ban is pressuring Austria to slow down its pullout so he can find replacements.