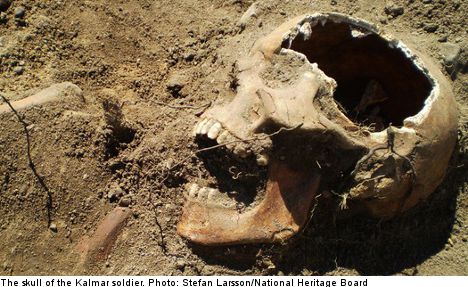 “All the lads thought it was really exciting,” Ronny Gustavsson, head of the Kalmar municipality service project, told The Local.

Gustavsson was on the scene soon after the workers found the bones while digging for a beach extension project in the area. While the digger itself crushed a hole in the skeleton’s skull, Gustavsson says the bones have weathered the centuries well.

“Besides the hole in the head it’s in pretty good condition – all the fingers and toes were in place. The guys all thought it was a real thrill to see.”

IN PICTURES: See more images of the skeleton

In line with Swedish law, the workers called the municipality, which in turn contacted the Swedish National Heritage Board (Riksantikvarieämbetet), which sent archaeologist Stefan Larsson to the scene to find out more.

“We haven’t done the full analysis yet, but an osteologist took a quick look and believes it to be a young male in his early 20s,” Larsson told The Local.

“I must admit the whole thing was quite fun for me – I’m an old-fashioned archaeologist. Usually, there is a long procedure involved in this kind of thing with a lot of paperwork, but this all went very quickly.”

Larsson is convinced the skeleton belongs to a soldier, which was a surprise to experts as the area was not previously known to have any war graves.

“This particular bloke was laid out quite neatly, with his hands over chest, a straight body, and in a surprisingly shallow grave. What was also surprising was that there were pot shards with the body that were dated to early 17th century, from the time of the Danish siege in 1611.”

The Kalmar War raged between 1611 and 1613, with much of the fighting taking place in Kalmar itself, on the far south-eastern coast of Sweden.

Other bones from earlier times were found further beneath the soil, although these have been left alone as the building was given the green light to continue.

As for the identity of the skeleton, Larsson can’t say for sure if he was a Swede or a Dane, but added that if the county authorities allow it, the team can continue its analysis.

“Maybe can find out from the pottery and the skeleton analysis where he is from, but this can be costly – it’s up to the authorities to decide what happens next.

“Any other bodies out there will remain undisturbed.”