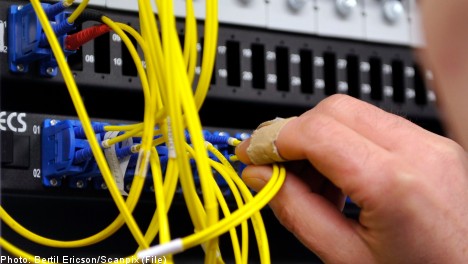 He added, however, that he was awaiting more information before assessing the impact of the confirmation of the US surveillance programme’s existence.

He pointed out that what some critical observers consider to be Sweden’s equivalent to the Prism, the FRA law, could not be compared to the extensive alleged access of US intelligence services to any and all data.

The law, “which passed through parliament bla bla bla,” said Bildt, is democratically founded and law enforcers need the approval of courts after presenting well-founded suspicions, he explained.

“Exactly what the system in the US is will at some point come out, once we have all the facts,” Bildt told an audience at the Economist’s Digital Horizons Conference in Stockholm.

The powers, granted in a controversial surveillance law, were meant to help FRA detect evidence of foreign threats to Sweden.

The foreign minister, an outspoken supporter of online freedoms, underlined that the rule of law and transparency were key to any data surveillance system. Swedish authorities publish annually how many surveillance cases have been requested.

“It’s about a hundred cases a year,” Bildt noted.

“People must feel confident that the system is not open to abuse,” he added, underlining that most people accepted a certain reach of surveillance agencies, within limits.

“There must be as much transparency as possible, it must be legally regulated, but the rule of law must apply online as well,” he said.

Bildt underscored there was no way to know what national surveillance programmes looked like worldwide.

“I wouldn’t even want to enter into the discussion with certain states that I will leave unnamed,” he said.

“Because they will lie.”

CCTV
Malmö police to use loudspeakers to fight crime from a distance
Url copied to clipboard!