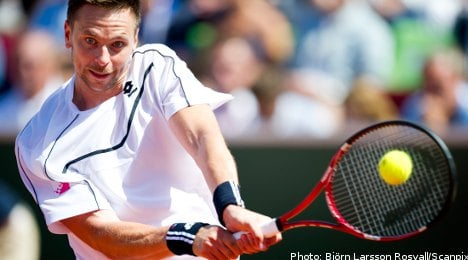 “I will come back when I feel 100 percent but I don’t know when. That’s how it is, unfortunately,” Söderling told tabloid Aftonbladet.

Söderling – the only man to have beaten Spain’s eight-time French Open champion Rafael Nadal on the clay at Roland Garros – has not played in competition since the Swedish Open tournament in July 2011.

Since then he has been hit by a series of health problems, including glandular fever, which is still affecting him.

The 28-year-old, who turned professional in 2001, told Aftonbladet that he was not yet fit enough to endure the rigours of competition tennis at the highest level.

“It’s hard to recover at a snail’s pace,” he explained.

“In the beginning it was difficult. When I went to bed every night, I told myself: perhaps I’ll be better tomorrow. That lasted a week, a month… I got another perspective on the passage of time.”

The Swede said he has made enough money during his career so far not to have to worry about working again.

According to the atpworldtour.com website, Söderling has won more than $10.4 million in prize money in singles and doubles.

“It’s an extraordinary feeling to be able to choose what you do, rather than having to do it. I’ve been spoiled,” he said.