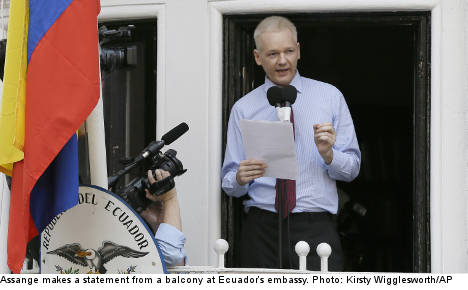 When AFP met WikiLeaks founder Julian Assange he was wearing a jacket and tie, but no shoes. If you have not stepped outside Ecuador’s London embassy for a year, shoes are largely pointless.

In an interview to mark this strange anniversary, the man behind the whistleblowing website that unleashed the wrath of Washington insisted diplomats have the potential to end the deadlock that has left him trapped.

Like something out of a spy novel, Assange, a 41-year-old former computer hacker from Australia, walked into the embassy on June 19th 2012 and claimed asylum in a sensational bid to avoid extradition to Sweden for questioning over alleged sex crimes.

Ecuador granted his request, accepting his fears that if sent to Sweden he might be passed on to the United States and prosecuted for publishing thousands of classified war logs from Iraq and Afghanistan and a cache of diplomatic cables.

But Britain has refused to grant him safe passage to Ecuador. For a year, police have maintained a 24-hour guard at the doors of the embassy – a modest apartment around the corner from the Harrods department store – and are poised to arrest him if he tries to leave.

The last year, Assange says, has been like living on a space station. He has used a sun lamp to make up for the lack of natural light, and exercises on a treadmill.

He has also been getting on with the business of being a thorn in Washington’s side.

“You ask how I deal with the difficulties of being confined. Well actually, my mind is not confined,” he said, leaning back in a chair in the embassy’s tastefully decorated front room.

“The physical circumstances are difficult. However, I’m working every day.”

He spoke as shockwaves reverberated around the world over the biggest US leak since WikiLeaks published the war logs and diplomatic cables in 2010: the exposure of spy agencies’ massive electronic surveillance programmes.

Edward Snowden, an ex-CIA employee who says from exile in Hong Kong that his conscience drove him to reveal the scale of the government’s spying on the public, faces a criminal probe – and Assange fears he will be treated as harshly as WikiLeaks’ leaker Bradley Manning.

“Mr Snowden is as good an example of a hero as any. He has performed an extremely courageous act,” said Assange, hailing him for exposing America’s “creeping mass surveillance state”.

“What we don’t want to see is him ending up the same way as Bradley Manning – detained without trial, abused in prison and now facing life imprisonment.”

Manning, a 25-year-old US soldier, is being court-martialed for passing the war logs and cables to WikiLeaks, with prosecutors arguing that leaking classified information is equivalent to helping Al-Qaeda.

Aiding the enemy can carry the death sentence, though prosecutors are not seeking it in Manning’s case.

“They’re trying to erect a precedent that speaking to the media is the communicating with the enemy – a death penalty offence,” said Assange.

“What’s at stake in this trial is the future of press in the United States and in the rest of the world.”

The name of the silver-haired WikiLeaks founder has come up frequently during the court-martial, which began on June 3rd. He claims there is a sealed US indictment against him, and that his conviction is a “99-percent chance” certainty if he ever ends up on US territory.

Assange’s critics accuse him of hiding from justice over the sex allegations – which he denies – saying his fears of being passed from Sweden to the US are unfounded.

Entering the embassy was the final twist in a long legal battle over the allegations. But Assange claims Britain and Ecuador can reach a deal that will see him leave “within a year”.

“I think the position in the UK is softening. Of course, it will never publicly humiliate the United States by offering me safe passage in a manner that doesn’t seem to be forced,” he said.

“But there’s lots of ways of saving the pride of Sweden, Australia, the UK and the United States,” he added, without specifying them.

He insists Britain is breaking international law by refusing to let him travel to Ecuador as a refugee, but admitted it was difficult to imagine a scenario in which he could leave without being handcuffed.

Will there eventually come a day when he just gives up and walks outside?

“When I’ve had enough? I don’t know. It’s hard to say. At the moment we’re doing such good work,” he said.

Although its recent scoops have been much lower-profile than the cables and war logs, it continues to publish leaks from around the world, including millions of Syrian politicians’ emails and US files on Guantanamo Bay.

Where will he be this time next year? “Hopefully Australia, Ecuador, travelling the world,” Assange said.