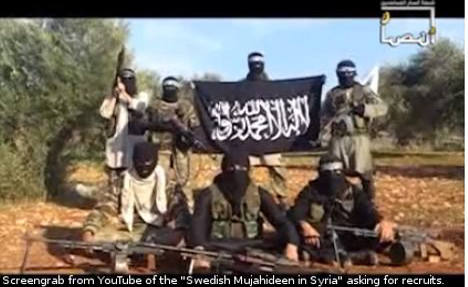 At least 30 Swedish citizens have travelled to Syria to fight against Assad’s regime.

According to Peste, the Swedish citizens who have joined rebel forces in Syria are dangerous individuals.

“In Syria they are dangerous. Some have committed attacks against civilians,” he claimed.

“What we are concerned about is the experiences they receive over there. They increase their ability to commit acts of violence. Many return to Sweden and, according to al-Qaida’s ideology, Europe and even Sweden are legitimate targets,” said Peste.

He claimed that there are known examples of individuals who have planned to attack Sweden.

Among the Swedes who have gone to Syria, some, said Peste, “have been part of this violence-endorsing Islamist, or al-Qaida-inspired, environment for quite some time.”

Others are completely new to those environments and have gone to Syria after witnessing from afar the atrocities that are happening there.

“We have seen others travel to Iraq, Afghanistan, Somalia and Yemen for example. What’s worrying about Syria is that quite many have gone there, at least around 30.”

Asked whether Säpo stands a chance of stopping them from going, Peste said “very rarely”.

“We look them up and try to talk to them. We tell them it is dangerous to go and that we cannot help them if someone catches them. But then they don’t have to meet with us if they don’t want to.”