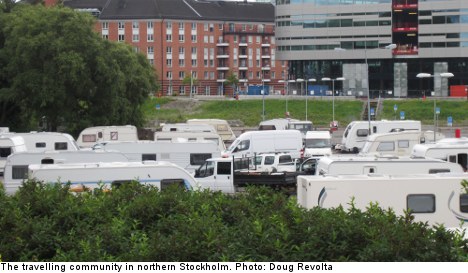 Students were told by Stockholm University on Friday that their safety could not be guaranteed over the weekend after the inhabitants of an estimated 50 illegally camped caravans were accused of driving recklessly and making nearby residents feel unsafe.

German exchange student Tanja Altunjan was one of the residents asked to leave the university accommodation, which lies in a cul-de-sac surrounded by pine forest on the edge of Kista, a suburban district in north-western Stockholm.

Students had to pass the enormous car park where the travellers had set up camp to get home.

Altunjan was left seething about the ordeal.

“We are the ones who have paid money to stay here and we are being kicked out. It feels like we have been evicted because they can’t evict (them),” she told The Local.

Fredrik Gårdare of the West Stockholm police confirmed that the travellers had left, and added that local police had been in contact with them previously.

“We had moved them several times from other positions; they started in Solvalla before they settled in Kista,” he told The Local.

He added that it was Sweden’s Debt Enforcement Agency (Kronofogden) – the only agency authorized to carry out evictions – that had demanded the campers be moved on, as they were staying in a car park that was private property.

“It happens every year, we have nothing against them as long as they do nothing illegal,” he added.

However, police confirmed they had sent patrols to the area several times after students complained of feeling threatened by members of the community.

Camilla Westerborn, a spokeswoman for Stockholm University, said the students were evicted for their own safety.

“Because of security issues, some students didn’t feel safe. I’ve been there and you do feel very alone walking around at night in the area,” she told The Local.

She added that students were offered new accommodation in Fjällis and Kungshamra, and that the university paid for the taxis to take them there.

Westerborn added that while she was aware of similar incidents in the past, the size of the camping community had been bigger this year than before, prompting university staff to think about their next move.

“We will have a meeting this week to discuss what we plan to do in the future. We are still offering Kista as an accommodation option for incoming exchange students in September,” she told The Local.

“But we have done all we can for the students, and we don’t want this to happen again.”