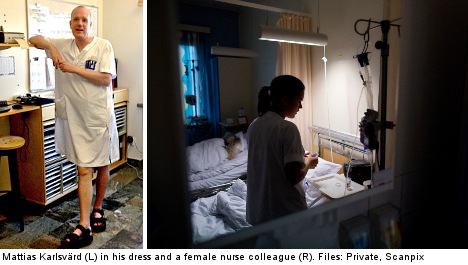 Mattias Karlsvärd, 42, said he had complained about the lack of shorts in the staff uniform three years ago, but been told by the Skaraborg hospital that there were no funds to update the uniform.

“Women are allowed to dress lightly for the summer, but men have to dress as usual,” Karlsvärd told The Local.

Then the story of the skirt-wearing train drivers in Stockholm reached his ears, he decided it was time to get his pins out too to protest the unequal treatment.

“It’s not really that important for me to wear shorts, but if you have a gender equality policy you should take it seriously.”

Karlsvärd said that gender equality was usually highlighted from a female perspective, and that it was important that he as an employee in a female-dominated industry also fought the good fight on his level.

“I can’t do much to make sure there are as many women board members in the big companies, or that all women are paid equally to men across Sweden,” Karlsvärd said.

“So you have to fight for the small stuff.”

His wife supported his decision to chuck the trousers away in favour of the dress without question, but Karlsvärd is upset at how impractical and ugly it is.

“My female colleagues would also wear shorts if they were available to us. This dress isn’t practical and even women look awful in it, although of course I look the worst,” he said.

The hospital meanwhile, told the Aftonbladet newspaper that Karlsvärd could wear the dress to his heart’s content, but added there was no money in the coffers to update the nurses’ wardrobe.

“The hospital doesn’t consider this to be gender discrimination,” Karlsvärd told The Local.

“Because I can wear whatever I want.”